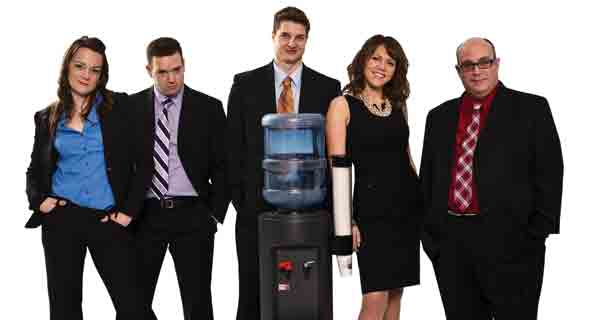 The Water Coolers, above, will take the stage at 7 p.m. on the JDCC campus in Alco as part of the series of performances sponsored by the Brewton Counil of the Arts.

Brewton area residents will have a chance Tuesday evening to relieve some stress through laughter as the Brewton Council of the Arts continues with a series of presentations.
The Water Coolers, a comedy troup based in New York, will be performing their unique style of humor as the curtains open at 7 p.m. in the Woodfin-Patterson Auditorium on the campus of Jefferson Davis Community College.
The Water Coolers is a musical comedy group that gears their performance toward adults of all ages, especially those who work in an office.
In a preview of the production, the comdey routines illustrate the highs and the lows of the workplace experience and reminds one of the NBC television show, The Office.
Madelyn Cave, publicity chair for the BCA, said the group is sure to put on a show that will have the audiences laughing all night.
“The Water Coolers take on work and life is hilariously insightful,” Cave said. “We are excited about bringing them to Brewton. It will be a fun night of comedy and entertainment.”
Anyone who has worked in an office with a group of other people knows the day to day combination of work and fun to be had in an office setting. Add to that music and it turns into a hilarious production that everyone can enjoy.
The audience at the upcoming production will be treated to a unique blend of comedy and original songs and are based on the experiences everyone talks about around the water cooler at work or just wish they could.
The Water Coolers was conceived by one of the creators of the long-running New York hit, “Tony n’ Tina’s Wedding,” Thomas Michael Allen.
Allen, a comedy writer will also bring his acting skills to the upcoming event.
The production has been hailed as a “breezy, satirical ‘Dilbert’-like musical revues that tickles the ears and funny bones” by the Associated Press and acclaimed by E! Entertainment Television and reviewers across the country. E Entertainment calls the show, “the hottest ticket in town and the sleeper hit of the season.”
The Water Coolers dead-on observations are drawn from the real life experiences of the creators, cast and crew. The executive producer, Sally Allen, is a former management consultant and the staff includes successful working New York composers and comedy writers and people who still have their day jobs in sales of publishing, plus one retired CEO.
The Water Coolers was founded in 2000 and continues to create original songs and song parodies that capture trends in the working world with wit and insight.
The group regularly performs for theatrical audiences and special events throughout the United States. It has been deemed a Broadway-caliber production which will keeps the audience involved, both with the music and the comedy.
Prepare to laugh out loud at the things that everyone confronts every day in an office, from the bad jokes to the ever-busy parent who is always trying to sell some product for their child in school. It happens to everyone. The trick is to make it into a fun situation.
The Chicago Sun Times said it is “guaranteed to make you laugh.”
The show is part of the 2012-2013 series for season ticket holders. Single tickets may be purchased at the door, $15 for adults and $8 for students.