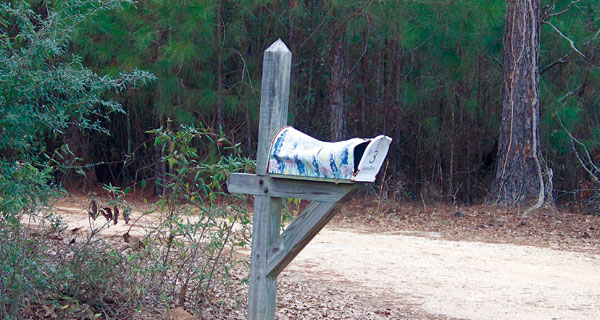 This mailbox on Long Boulevard may have suffered damage at the hands of the mailbox bandit.

With as many as 100 mailboxes in Brewton and East Brewton falling damaged or demolished, Brewton police are looking for the responsible party.
Sgt. Patrick Caylor said the first reports of damaged mailboxes was made in November with officers battling the problem ever since.
“We had as many as 50 mailboxes damaged in Brewton and East Brewton back in November,” Caylor said. “We have been looking for the person or people responsible since the first report. We had reports of more damage this weekend in different areas.”
Caylor said the path of destruction appeared to follow a pattern in some of the cases reported.
“It appears as if the boxes are being hit with a baseball bat or some similar object,” Caylor said. “They aren’t hitting them with a vehicle. At times it looks as if they are traveling in a block area destroying the mailboxes.”
Caylor said the person responsible for the damage could be facing criminal mischief charges, but other charges could be made in some cases.
“These mailboxes are considered property of the postal service,” Caylor said. “If the postal service were to get involved in this there could be federal charges filed.”
Caylor said officers and investigators are looking for information that could lead them to the person or people responsible.
“We’ve had mailboxes hit on several different streets in Brewton,” Caylor said. “We want to stop this destruction. The residents just want their mailboxes fixed or replaced.”
Streets with mailboxes that have been damaged or destroyed included Escambia Avenue, Long Boulevard, Nopajope Lane, Belle Meade Drive, Old Castleberry Road, Georgia Lane, MLK Drive, Sowell Road, St. Nicholas Avenue and Dacus Street.
Caylor said one suspect had been questioned and cleared in the case and other leads are being followed.
“We don’t have anything concrete at the moment on a suspect,” Caylor said. “But, we are following every lead. We are asking that anyone who sees or hears anything unusual in connection with this kind of damage to call us and report the suspicious activity.”
Caylor said some witnesses had given a description of a vehicle that may be involved in the attack, but no suspects have matched the information received.
Caylor said reports or tips can be called into the department anonymously at 867-3212.