Whatever it takes: Drivers, administrators focus on safety 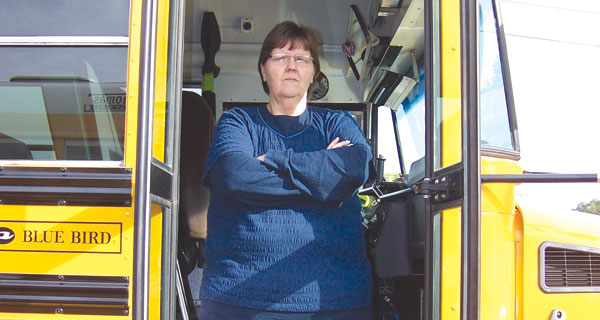 Linda Gibson, above, says her job as a bus driver for the Escamibia County Board of Education is one she takes seriously every day. Referring to her passengers as her “babies,” Gibson said she too would giver her life for their safety.

Linda Sue Gibson would never let anything happen to one of her “babies.”
Gibson, who drives a school bus for W.S. Neal, said she can’t imagine how the driver of a Midland City school bus felt last week when confronted by a gunman trying to abduct two children. The gunman killed the driver, took a 5-year-old boy and was still holding him hostage at press time — four days after the incident began.
“I can’t imagine what he must have been thinking as that was happening,” Gibson said. “I know that I would put myself between danger and my students any time. I believe I’d do whatever I needed to do to keep my babies safe.”
Those sentiments were echoed by other bus drivers Friday as the hostage situation with the special needs child continued in the small community in Dale County.
Even before the incident occurred Tuesday afternoon, state Rep. Alan Baker, R-Brewton, had been working to draft a bill for the legislative session that begins Tuesday. The bill would make boarding a school bus without authorization a first-degree class B misdemeanor offense, which would allow for stiffer penalties than current law allows.
“This bill was not prompted by the tragic incident in Dale County,” Baker said. “The bill had already been crafted for the upcoming session. If the bill is enacted, it will not safeguard the school buses from all act of violence, but will provide an added measure of safety and security to school bus drivers and their passengers.”
Baker said the existing law provides for the crimes of boarding a bus to be prosecuted as criminal trespassing in the first-, second- or third degree.
“This bill would establish the crime of trespassing on a school bus to be prosecuted as a first-degree crime,” Baker’s bill states.
Other Escambia County bus drivers said the proposed bill would give them more ground to stand on when refusing access to the bus by unauthorized adults.
“We stick our necks out every day to make sure the children are safe,” driver Liz Moye said. “If anything happens to them, it’s on us. We’re no different from that man in Midland City. Bus drivers are good people, and we take our responsibility to take care of those children as serious as anything.”
Escambia County buses have digital camera systems — with two to three cameras — that record high-definition sound and pictures at all times, said Escambia County Superintendent Randall Little.
Little also said he supports Baker’s bill to put more teeth in the law regarding trespassers on school buses.
Brewton City School Superintendent Lynn Smith said the bill would further help protect the school system if violators need to be prosecuted.
“We talked to our drivers collectively and reemphasized the safety procedures they have already been taught,” Smith said. “We have notices clearly posted on our buses letting people know that it’s against the law for anybody to enter a school bus that doesn’t have permission or authorization.”
Smith said bus drivers know the students, their parents and their routes and can easily recognize problems if and when they arise.
“The drivers know the folks who are always there waiting for the children,” Smith said. “If something looks suspicious, they drive on and deal with it at the next stop. They know you don’t open the door for just anybody and that you don’t have adults getting on the bus to discuss a situation. They understand the safety procedures well.”
Some drivers said having to deal with parents or other adults who may have issues with service is something they expect to happen from time to time.
“I had a lady come to my bus who looked upset,” driver Quincy Nearer said. “When I saw that, I pushed the button to turn on the camera on the bus. I then asked her to step off the bus and I was able to talk to her then.”
Buses are equipped with warnings posted beside the entry doors warning authorized personnel about the consequences of stepping onto the bus.
“Each bus has the sticker right there for everyone to see,” Gibson said. “If someone comes up we just tell them to read that notice and we don’t have any problems.”
The notice clearly posted on each school bus reads: “Unauthorized entry illegal: Any person who attempts to enter a school bus without prior authorization of the driver or other appropriate school official and refuses to leave will be subject to prosecution that may result in fines of up to $2,000 and up to one year in jail.”