Bump in the road: Can East Brewton afford matching funds? 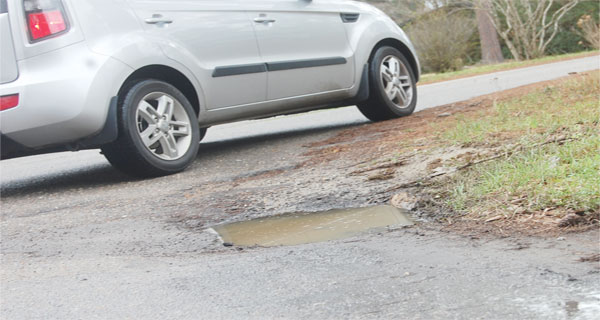 A pothole on Dailey Street in East Brewton may go unrepaired unless officials can find funds.

The pot holes and rough patches that dot Shoffner and Dailey Streets in East Brewton may be a part of the landscape for sometime to come — unless the city can find funds to meet requirements of a matching grant for paving.
Gov. Robert Bentley announced Monday that funds had been released through the  statewide ATRIP program to help pay for more than 300 road and bridge projects around the state — including $4.9 million worth of projects in Escambia County, Atmore and East Brewton.
ATRIP road and bridge projects require local matching funds of 20 percent provided by either the local government or through a local public-private partnership — a feat East Brewton officials say they may not be able to perform.
East Brewton Mayor Terry Clark said the paving projects on the list are needed desperately, but the matching funds required of the city may not be available.
“Our part of the project funding comes to around $150,000,” Clark said. “The thing is, we just don’t have it.”
Clark said the original request for the funding for the East Brewton projects was offered in a couple of options.
“There was a choice that we could ask for the money without having to put up any matching funds,” Clark said. “That was certainly what we wanted. But, in this ATRIP program, it had to be done as a county, and the county commissioners opted to go for more money for projects with a 20 percent matching fund requirement.”
Escambia County Administrator Tony Sanks said the ATRIP funds will be released only if the sponsoring governments comes up with the required matching funds.
“We did have an option to apply for funding without matching money,” Sanks said. “But, it would have been a limited amount of funding. This is the second round of ATRIP funding announcements, and our county had already used a portion of the total allowable amount that did not require matching funds.”
Sanks said nearly $2 million of the $5 million in funds for non-matching projects has already been claimed in the county.
“We had over $1.9 million awarded in Escambia County in the first round,” Sanks said. “That limited us to less than $3.1 million in this latest round.”
Although the $3 million left on the ATRIP table for the county may sound like a lot of money, Sanks said it wouldn’t go very far.
The East Brewton projects on the list — Shoffner and Dailey streets — would have used up just over a half million dollars of the $3 million available, leaving precious little funding for the remainder of the county.
“I know that $150,000 for what we want to get done is a bargain price,” Clark said. “But we just don’t have it. I will be discussing this with our council members to see if we can come up with anything to make this work. But, right now, I just don’t know if we’ll even be able to use what we’ve been awarded.”
The projects planned in East Brewton are the resurfacing of Shoffner Street from U.S. 29 to the East Brewton City Limits and Dailey Street — in two sections — from East Railroad Street to Shoffner and from U.S. 29 to East Railroad Street.
County projects, which total just more than $1.4 million, are planned for the resurfacing of Canoe Road North to Robinsville Road; Wolflog Road from Alabama 113 to Old Highway 31; and Ridge Road from the East Brewton city limits to U.S. 29.
Under the current plan, ATRIP funding will be used for 10 projects around the county. The local funding — to be paid by the Escambia County Commission, the City of East Brewton and the City of Atmore — would be $1,272,917, with ATRIP funding at $4,905,032  brining the total cost of the projects to just more than $6.1 million.
ATRIP is the largest road and bridge improvement program in Alabama’s history.
“Everyone benefits from ATRIP,” Bentley said. “We’re improving public safety by replacing old bridges and repairing and widening outdated roads. ATRIP also helps create jobs. When companies build new facilities, they look for areas with good roads and bridges. ATRIP is giving them what they need. The more companies that build and expand in Alabama, the more jobs we’re able to create.”
At least one additional round of ATRIP funding is scheduled, Alabama officials said. Eligible projects not selected in previous funding rounds are once again eligible to be submitted.  The deadline for submitting applications for the next round of funding is May 31.
The City of Brewton did not opt to participate in ATRIP, but last month Mayor Yank Lovelace said the city would receive $600,000 in road paving funds through the state Department of Transportation’s ATRIP companion program, RAMP.