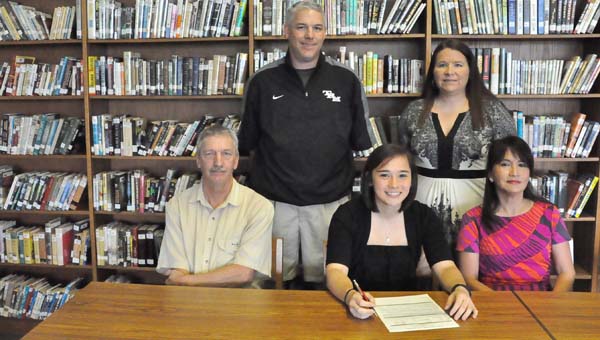 Jefferson Davis Community College Lady Warhawk softball coach Misti Nims signed T.R. Miller’s Audrey Hamric at 11:15 a.m. Monday at the school’s library.
Nims said she has watched Hamric for the past few years and noticed that she has improved tremendously.
“What caught my eye is that she plays multiple positions, which increases her knowledge of the game,” Nims said. “Audrey’s speed and power along with her will to win is exactly what we need for our program.”
Joining Hamric at her signing was her parents Byron and Nenita.
Hamric said she is glad to have received the scholarship from Nims and JDCC.
“It feels pretty amazing that I got a scholarship for something I love doing,” Hamric said. “I wanted to sign with JDCC because it’s close to home and the team is like a family.”
While her senior year is yet to be played at T.R. Miller, Hamric already has goals of what she and her team want to accomplish as well as what she wants to accomplish at the college level.
“I hope to accomplish a lot in my senior year of high school to make it to (regionals at) Gulf Shores again,” she said. “I believe in my team and I know we can do it. And in my first year of college, I hope to learn and achieve new things. I hope to get better.”
Hamric’s coach at T.R. Miller, Greg White, was also on hand for the signing.
“Audrey has worked very hard for this opportunity,” he said. “She is probably one of the most non-selfish players that I have ever coached. She will play anywhere she needs to play and do anything she needs to do to help the team. She’s just one of those kids who truly enjoys playing softball and being out there on that field whether its a game or practice. I think she has a lot to offer to JDCC and I wish her nothing but the best.”
T.R. Miller will begin their season March 1 at home in their own TRM Invitational.