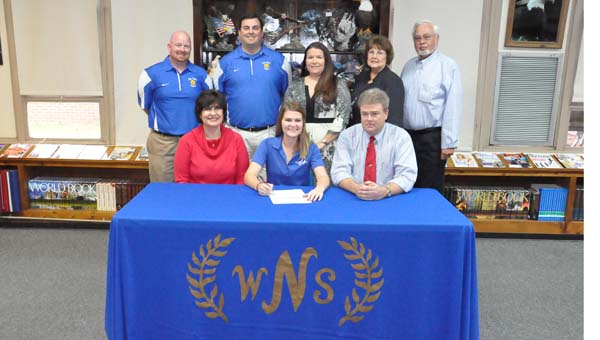 Jefferson Davis Community College Lady Warhawk softball coach Misti Nims signed W.S. Neal’s Kaitlin Hadaway to a softball scholarship for the 2014 season Monday afternoon.
As for Hadaway, Nims said she has also watch her grow over the past few years on the pitchers mound.
“What has impressed me most is her ability to balance family, multiple sports, and after school activities all while maintaining excellence in the classroom,” Nims said. “Kaitlin is a great pitcher who will have an immediate impact within our pitching staff. She is a hard worker and is motivated. Her ability to lead in a positive manner will be well received.”
Hadaway was also glad to sign to play with the Lady Warhawks.
“It feels pretty amazing,” Hadaway said of signing with JDCC. “I have put a lot of time and effort to get where I am now. To me, signing a scholarship feels like a reward for all the hard work that I have put in. Thanks to all my coaches that have helped me over the years. Coach Joe Ellington got me started in the seventh grade and coach Jeff Haney for being the best mentor on the high school field that anyone could ask for. Coach Jason Blaney for being the best pitching coach and knowing what pitches work for me. Coach Jim Webb for being a great pitching coach and teaching me so much and coach Devin Pierce for taking a chance with on the Bama Babes travel team.”
Hadaway’s mom and dad—Dennis and Sonja Hadaway—were on hand for the signing as well as her grandparents Joe and Gladys Fuqua.
“I have been given an opportunity many people do not get,” Hadaway said. “From the beginning, I knew I wanted the opportunity to continue my softball career on the next level. I will be the first in my family to play on the college level and to me that is a big achievement. I have had the opportunity to watch JDCC play and I have lied coach Misti Nims and the way her teams play. I feel comfortable and I think she will help me become a better ball player. I have always liked the campus on JD. I am taking some classes there now and it allows me to get my basics in before I move into my field. I also will get the feel for college while staying at home.”
One goal Hadaway has for her senior season is to advance to the regionals in Gulf Shores—somewhere the Lady Eagles have been close to making in the past but have not reached yet. But while that is a goal on the field, she has others in mind as well.
“Now that I am a senior and have played many years at W.S. Neal, I would like to set an example for the future softball players at Neal,” she said. “While coming though high school, many people believed in me, which helped me, get where I am now. I also want the younger players to know that they can achieve whatever they set their minds too, I want to continue our winning streak and hopefully get the opportunity to make it to the regional and state tournament. As for college, I want to strive and be the best I can be, on and off the field. I want to be an addition to the team, one that will help them in the future. I would like to win our conference and what I have observed from coach Nims and the softball team, there is no reason we cannot do that. I also want to get the education I need to help me pursue my dreams of one day going on to Auburn University and getting the education I need to be successful in life.”
Eagle head coach Jeff Haney said he is really excited about Hadaway signing with JDCC. “She has worked hard for the opportunity to play college softball and I am glad that coach Nims has given her this opportunity,” he said. “Kaitlin has been one of the building blocks of our softball program. She started games for us as an eighth grader and has started every varsity game on the pitching rubber since that time. Her hard work and dedication have led to the success of our team. Kaitlin has been involved in many activities during her high school career including band (drum major this year), volleyball, and numerous academic organizations. I can’t wait to see what she can do when she is able to concentrate only on softball and her classes. As hard as she has worked, and as much success as she’s had, I know that she has not reached the peak of her abilities. She will be an outstanding addition to Jeff Davis’s team.”
W.S. Neal is to begin their 2013 season Tuesday at home against Central at 4 p.m.