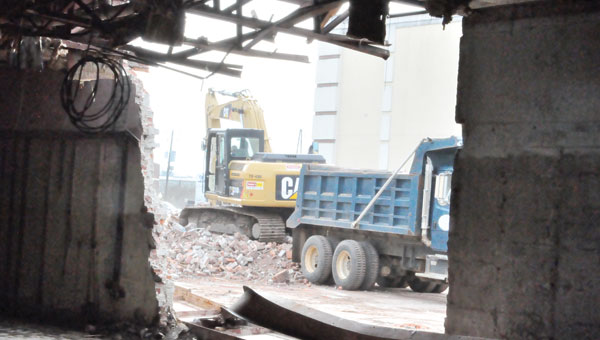 Bulldozers and workers began demolition of buildings this week along a section of Belleville Avenue, scooping up brick and mortar along with the memories of many area residents.
The first building to go housed The Fair Store, which offered goods to many area residents for decades. The building would later be home to Wheels and Thrills Roller Rink, which stood as a gathering place for children, teens and adults for many years.
Jerry Kelley Sr., Bank of Brewton president, said the property has been owned by the bank for about five years and is being cleared in preparation for better use.
“Those buildings have been vacant for some time,” Kelley said. “Our plans right now are to clear the area down to the property owned by the Gordy family and create a parking lot there. There may be other plans in the future for the space.”
Even as the dozers began removing the rubble created by the demolition work, residents began sharing their memories of the businesses that formerly occupied the space on the corner of the street.
Christine Poe remembered shopping experiences at The Fair Store
“Back in the ’70s shopping at The Fair Store was more exciting than attending a State or County Fair,” Poe said. “Each customer was treated like a VIP. All one had to do was tell the clerk what one was looking for and she would make selections, bring each to the dressing room, and let the customer make her own selection with no sales pressure. If it was a gift one was buying, it would be gift wrapped free. And my daughters loved it because they could always find the newest ‘Hang Ten’ clothing. I wish I had a Fair Store at which to shop now.”
Other memories of The Fair Store included building signage as well as the customer service offered by the staff. “I remember when they had the big golden mother goose egg on the side of the building,” Gloria Jerkins said. “I used to shop in there with my mom and I remember hiding under a clothes rack once — and when my mom found me, let’s just say it wasn’t pretty.”
Faye Hicks said the time may have come to take down the building to improve the area.
“When I think of the Fair Store my mind immediately goes to Buford Lowery and Charlie Thompson,” Hicks said. “Another piece of my childhood gone, but I will admit that it had become an eyesore and danger. It was time.”
Following the demise of The Fair Store, a skating rink opened in the location after renovations and improvements were made on the building.
For many years, many children and teens made Wheels and Thrills Roller Rink their weekend home-away-from-home.
Connie Otts Campbell, who’s family owned and rank the skating rink, remembered the era of the business with fondness.
“I am sad that the building is being torn down,” Campbell said. “We have many, many memories from Wheels and Thrills. So many grew up there, every Thursday, Friday and Saturday night.”
Lisa Fay said the people who worked and played there have given her plenty of good memories.
“I remember going every weekend to skate there,” Fay said. “Mike Otts would get my skates for me without asking my size because he’d remember what size I wore because I was always there. He was so sweet. I also loved to watch Ludon Simmons skate. I used to tell him he needed to go pro. Lots and lots of memories there.”
The Fair Store closed in the location sometime in the mid-1970s according to some sources.
Wheels and Thrills Roller Rink remained an active hang-out for area residents for nearly a decade following the closing of the store.
Demolition on the location to include several former retail sites will continue over the coming weeks, officials said.