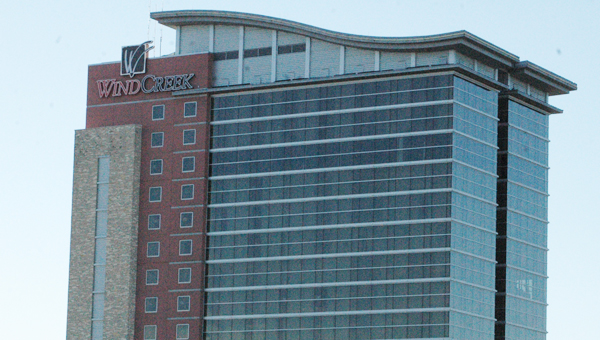 Firing the state’s strongest salvo yet against Indian gaming, Attorney General Luther Strange on Tuesday filed a lawsuit to stop the operation of slot machines at casinos owned by the Poarch Band of Creek Indians — including Wind Creek in Atmore.

Strange acknowledged the state cannot enforce state law on Indian lands by searching for or seizing what he called “illegal devices,” but the lawsuit contends that Poach still has an obligation to comply with state laws that prohibit slot-machine gambling.

The lawsuit further alleges that the “continued operation of unlawful gambling devices by Defendants is a public nuisance” that should be enjoined by the court.

In an official response to the attorney general’s suit, PCI spokeswoman Sharon Delmar said the litigation has no solid footing.

“The lawsuit filed today by Luther Strange has no legal merit,” PCI officials stated in the response. “First, as a federally recognized sovereign Indian nation, Poarch Creek’sland is governed by federal, not state law. While we respect Mr. Strange’s attempts to fulfill his duties as state attorney general, he is not a federal official and therefore, has no jurisdiction or enforcement authority over tribal land or tribal gaming operations.”

The statement also says PCI machines are within the parameters laid out by federal laws.

“Secondly, the machines that are in use at all of PCI Gaming’s casinos are electronic bingo (Class II gaming machines) and are legal under federal law. While Mr. Strange may target VictoryLand and any other gaming facility in the state, this lawsuit against Poarch filed in Circuit Court is yet another example of Mr. Strange refusing to recognize the sovereignty of the Poarch Band of Creek Indians.”

The lawsuit — which came on the same day state police served a search warrant at VictoryLand Casino in Macon County — came after Strange had sought opinions from the National Indian Gaming Commission on Poarch’s activities.

The Indian Gaming Commission previously responded that Poarch’s machines were legal, based on parameters from state and federal laws.

“Unlawful gambling is a statewide problem, and I have worked with local authorities to enforce Alabama law consistently and fairly throughout the state,” Strange said. “I have sent two letters to the National Indian Gaming Commission, asking them to stop the Poarch Band’s unlawful gambling, but the Commission has refused to do anything about it. The commission’s inaction has left me with no choice but to file this lawsuit,” Strange said.

In both Atmore and Wetumpka, the cities’ mayors have spoken in out in support of PCI.

“It aggravates me every time people start on that,” Atmore Mayor Jim Staff said. “People are going to spend their money on what they want to do. That’s sovereign property out there. It doesn’t belong to the state of Alabama.”

Wetumpka Mayor Jerry Willis said he was not contacted by Strange about the challenge to the legality of one of the city’s biggest employers. But he said he trusts that Strange “has the information and power to do it.”

“It is what it is,” Willis said. “I hope they can come to a conclusion about whether they can be there or not.”

Willis said the city has been “supportive of PCI Gaming’s efforts all these years.”

“And we will continue to be supportive,” he said. “They have contributed and have been willing to work with us on every front. I hope we can come to a reasonable solution and put this behind us and move forward.”

Staff also praised the tribe for their contributions to the community, as well as the many local residents they employ.

“We like the jobs. They are good paying jobs. They are doing a lot of work in the school and with work force developing. I think everybody here wants to them to just keep on keeping on.”

In 2012, Congress was considering proposed legislation that would have overruled Carcieri v. Salazar, 555 U.S. 379 (2009), a U.S. Supreme Court decision that limited the Secretary of Interior’s ability to set aside land for Indian tribes to use for gambling. Strange has requested that Alabama’s Congressional delegation oppose the proposed legislation and co-sponsored a letter from 13 state attorneys general to Congress in opposition to it. Strange has also filed a brief in the Alabama Supreme Court that asked the Court to apply the Carcieri decision to the Poarch Tribe.

That Carcieri decision also drove a dispute between Poarch and the Escambia County Commission last year. The commission has been seeking tax revenue from Poarch from its casino operations.

Commission Chairman David Stokes said Tuesday his only objective in that quest was “to receive revenue for the citizens of this county — anyone who would receive benefits from tax revenue.”

“I had hoped that leadership with the Poarch Band of Creek Indians would have sat down before this and worked out an agreement with limited waiver of sovereign immunity like others have done, but that request from myself and other commissions went nowhere.”