The scoreboard at Monroe County High School may have had the final score wrong.
There may have been some questionable calls in the game.
And the coffee from the concession stand may have looked like mud and tasted bad, but all T.R. Miller head baseball coach Jim Hart may remember about Monday night is that it was the night he clinched his 300th win.
Hart, who has been coaching for 35 years, has spent the last 21 years as head baseball coach for the Tigers after taking over for the late Donnie Rotch in 1993. His wife, Nancy – who delivered that bad coffee from the concession stand but has also attended nearly every one of his 300 wins — was again at his side
The 62-year-old Evergreen High School graduate, who has led T.R. Miller to a few state semifinals and one state runner-up, has coached at T.R. Miller from 1974-1984 and then from 1988 to present.
“There have been a lot of good players,” Hart said after clinching the milestone and posing for pictures with the current Tiger team, who gave him a special memento to remember his special moment. “There have been a lot of good assistant coaches. They had a whole lot more to do with that than I did. I have been very fortunate and have enjoyed it.”
While it was he who was in spotlight Monday, Hart reflected on the many players he has coached over the years.
“You really lose track of how many you have won and everything,” he said. “You think more about the kids and what they are going to do and how successful they are going to be and what they are going to go on and do. It is nice. It really is, but it is not the most important thing.”
Chris Baxter currently serves as one of those assistant coaches and said it has been an honor to be able to coach with Hart.
“He has been in baseball for a long time,” Baxter said. “Actually, the first time I met him was when I was umpiring their game against St. Paul’s in the semifinals. I have always respected him as a baseball coach. He always does a really good job with those kids, and the kids love playing for him. That is what most of those wins are about. They are about those kids that played for him. That is a big thing.”
Ryan Hunt was the winning pitcher Monday night for Hart’s 300th win.
“It was an exciting experience,” Hunt said. “It was an once-in-a-lifetime deal. I am glad he put the ball in my hand to help get him his 300th win. It has been good to play for him. He is tough on you. It is out of love though.”
Kevin Davis, an Auburn commitment, had a homerun in the milestone game.
“Having a homerun in his 300th win is big, but that means absolutely nothing in him getting his 300th win and being part of that team and to be on the field when it happened,” he said. “It has been special to play for him. He was my position coach in football with him serving as quarterback’s coach. He has also been my baseball coach the past four years. It has been a true experience and it has been an honor. He has done a lot of great things to help me as for as college’s calling, scouts. He has done everything you can put in his hands. He has gone above and beyond to do everything for the kids on the team.”
In the game, it was all T.R. Miller from the start, as despite the scoreboard saying 17-1, the Tigers of T.R. Miller won 18-1 for Hart’s big win. 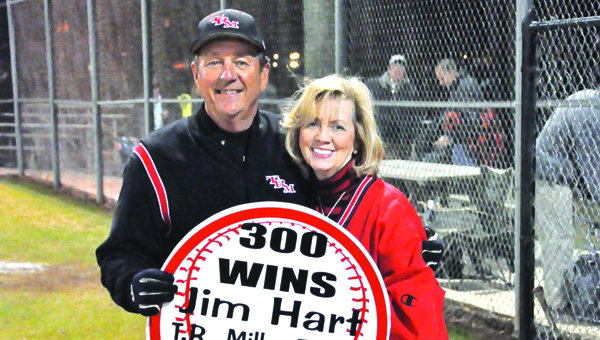 The Tigers held Monroe County to one run in the second inning while scoring four of their own runs in the first, three in the second, four more in the fourth and seven in the fourth to get the 17-run win.
Jones Manning had a single and two RBIs for the Tigers and Jacob Fillmore had a triple, a double and one RBI. Kevin Davis had a two-run homerun while Hunter Brittain added a triple and two RBIs.
Kyle Davis had a double and one RBI along with Dominique Jackson.
Monroe County made 12 errors in the loss.
On the mound, Ryan Hunt earned the win going three innings and allowed one hit, one run, walked and struck out two.
Fillmore went the final two innings and struck out three.
The Tigers improved to 3-1 with the win. Hart went for win 301 Tuesday night at home against Flomaton, although results were not available at press time.
He was to be presented with a plaque at the home game to represent Monday’s win.
T.R. Miller will play at Excel Friday in a doubleheader.