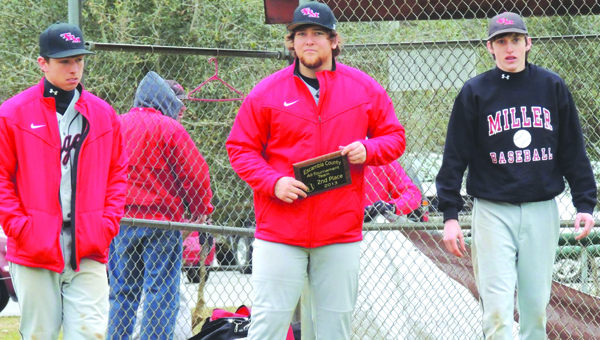 After falling to rival W.S. Neal in their first game of the Escambia County Tournament Friday night in Flomaton, the T.R. Miller Tiger baseball team edged out the host Hurricanes 5-4 in extra innings on a frigid Saturday to take second place.
The win improved T.R. Miller to 2-1 this season.
Flomaton led T.R. Miller 3-0 after the top of the second, but the Tigers cut the lead to 3-1 in the bottom of the inning.
After T.R. Miller tied the game a 3-all in the third, the Tigers took a 4-3 lead in the sixth. With the Tigers serving as the home team and needing three outs for the win, Flomaton kept the game alive with a run of their own in the seventh and forced extra innings after the Tigers failed to score in their half of the inning.
Neither team would score in the eighth and ninth innings, but the Tigers claimed the win in the 10th. In the inning, the Tigers benefited from two hit batters to start the winning, a Flomaton error to load the bases and then a walk to Ryan Hunt to get the win.
Darby Black was the winning pitcher for the Tigers in relief of starter Kyle Davis.
Flomaton 11, TRM JV 6
The Tiger JV started their season 0-1 Saturday morning with an 11-6 loss to Flomaton.
The Hurricanes used a seven-run third inning to get the win over the Tigers.
Todd Mayo had the lone hit for T.R. Miller in the third inning.
Lane Clark took the loss on the mound in relief of starter James Peach.
Todd Mayo also pitched in the loss.