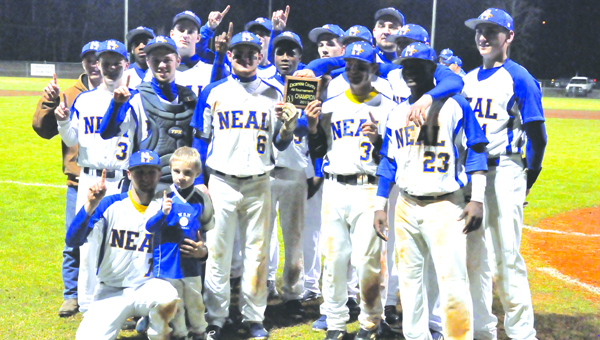 While the W.S. Neal Eagles were in familiar territory when they won the Escambia County tournament Friday night, it was the way they won it that was different for the team.
In order to get the championship with a 12-5 win over T.R. Miller, the Eagles took down the Tigers with fireballer Kevin Davis on the mound.’
“We executed tonight,” W.S. Neal head coach Coy Campbell said Friday after the win. “We had a plan coming into the game and it worked. Nothing against Kevin, he is a great pitcher. I am just proud of all our kids. All our kids that pitched did a great job. We run several out there. It is a team thing. I keep telling our kids it is not about one individual. It is about team. I am just really proud of them.”
Tyler Joyner, Jeremy Myers, Keith Bradley and Cam Blackman pitched for the Eagles.
W.S. Neal defeated Flomaton Thursday night 14-1 in the first game of the tournament. The Eagles also won the tournament title in 2009 and 2010.
Brian Settle, Cam Blackman, Dylan Godwin and Jeremy Myers all made the all-tournament team. Myers was the MVP.
T.R. Miller took second in the tournament with a 1-1 record. Darby Black, Jacob Fillmore and Jones Manning made the all-tournament team.
With T.R. Miller leading W.S. Neal 1-0 after the top of the first inning after a Jacob Fillmore homerun, the Eagles struck for four runs in the bottom of the inning to take a 4-1 lead. W.S. Neal benefited from three walks in the inning by Davis, a single by Damion Williams and one Tiger error.
T.R. Miller tied the game at 4-all in the fourth. T.R. Miller used a double by Darby Black, a hit batter, a sacrifice and a single by Jones Manning and one Neal error to get back in the game.
From there, W.S. Neal took a 5-4 lead into the sixth inning. Tripp Floyd started the inning in relief of Davis. W.S. Neal scored seven runs in the inning on two hits and three Tiger errors to blow the game open and get the win by eight.
Tiger head coach Jim Hart was disappointed in his team’s performance.
“We have to play,” Hart said. “If our pitcher has a bad game or our catcher has a bad game or whoever has a bad game, there are eight other guys out there and we have to learn how to play. We got back in the ballgame when we could not execute bunt defense. … It was just a pretty poor effort.”
Campbell said getting runners on early against Davis and T.R. Miller helped his team get the win.
“We got the leadoff guy on and Damion (Williams) comes up with a little slash up the middle to get things rolling,” he said. “We put some bunts down and we executed. We were able to put a little pressure on them and in times past we have not been able to do that to them when Kevin is on the mound pitching. That was big to get base runners on.”
While the Eagles are 1-0 against the Tigers this season, the win did not count in the area standings for the two teams. The two teams will play later in the season in a three-game series that will help determine the area race.
“To win the county tournament, it is great for W.S. Neal and our community,” Campbell said. “But we knew coming in that it was not just about wining the county tournament. It was seeing how we matched up with them (T.R. Miller). To be able to win was good for us, but if we don’t win in April against them, we don’t get in the playoffs. That is where we are, and I am sure Coach Hart is the same way. We are playing to get in and see what happens.”
The two teams will play against each other in area play on Thursday, April 4, in Brewton. Game time is set for 5 p.m.
The two schools will meet the next day in East Brewton for a 4 and 6 p.m. doubleheader. The third game is the tie-breaker game if the two teams split the first two games.