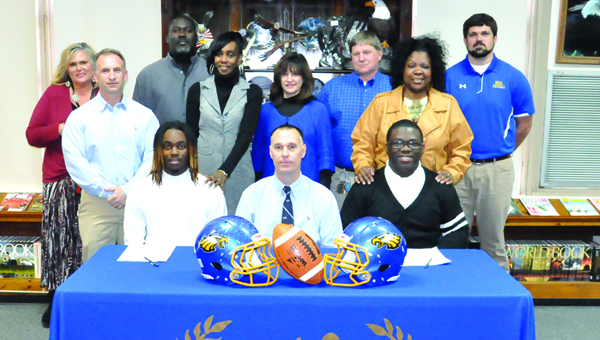 The connection of W.S. Neal High School and Stillman College in Tuscaloosa grew by two Wednesday morning as Eagle teammates Josiah Nettles and Bryson Peterson signed to play college football for the Tigers.
Nettles and Peterson will join Teddy Keaton at Stillman next season. Keaton is from East Brewton and went to W.S. Neal High School.
“It feels good,” Nettles said of signing to play football at the next level. “I always wanted to play football but I never knew I was going to play at the college level because I like basketball. Growing up, football became my more dominant sport in my life, but it feels really good to sign a football scholarship to play college ball. My grandmother is an alumnus from that school. It is also close to home and I know my mom likes to come to all the games so it is a good pick for me.”
Peterson echoed Nettles’ thoughts on signing.
“It feels good even though I have only played for two years,” he said. “I have worked hard for what I have got and just like Josiah said, it is close to home and my mom will be able to come see the game and come see me anytime she wants to.”
Both Nettles and Peterson said they like the idea of going to the same school.
“It is really good to go in with someone you know,” Nettles said. “Knowing the ability they have and when we get up there together, it won’t be as hard as going in with someone different.”
Peterson said Nettles is like family to him.
“It is good going in with someone that I basically grew up with,” he said. “He is basically like my younger brother. We grew up together so we know what each other’s tolerances are and what the other one can do.”
The two athletes helped the Eagles of East Brewton to one of their best seasons in years. W.S. Neal went 9-3 this season and advanced to the second round of the playoffs before falling to state runner-up Fayette County.
Nettles ran for 907 yards on 98 carries and scored 12 touchdowns this season.
Nettles and Peterson are W.S. Neal head coach Doug Hoehn’s first two signees from W.S. Neal. The duo is the 61st and 62nd players to sign scholarships under Hoehn from 13 years as head coach to 34 different schools.
“Josiah and Bryson are two kids, when you think of coming in as a new coach and where you want your team and all the things that you want to change when you get there and implement and identify the player that has bought into all the changes you want to implement, those two kids fit that profile,” he said. “They have worked extremely hard and their off-season work has been tremendous. It has really helped them to get these offers. When I arrived here, neither one had taken the ACT. We sat down and talked with them and they did everything we asked of them. They picked their grades up and took the ACT multiple times and increased their scores there. They did everything they had to do to meet the qualifications of the NCAA clearinghouse and to be in the position to sign these scholarships.”
Hoehn said he was proud of his two players.
“We are very proud of them today and it just goes to show you that hard work pays off,” he said. “I know it is an old fashioned philosophy, but it does pay off and it shows their parents are involved in their life. Both those kids have very active parents involved in their lives. In the two years since I have been here, our principal Patty Frazier and our assistant principal Todd Williamson along with our counselor Kimberly Corcoran and myself met on a continual basis. We are always looking for ways to improve our kid’s chances of going on the next level. Ms. Frazier does the scheduling, Mr. Williamson does the tutoring and credit recovery and discipline and Ms. Corcoran does the handling of all our forms and financial aid. When you put all this together and have all this effort, it helps our kids to play at the next level and that is what is important.”
Keaton says both players will be good players at Stillman.
“When I saw Bryson on film, I saw he was extremely strong and could move well,” Keaton said. “His ability when passing on folks needed a little work but that was because that was not the type of offense W.S. Neal ran. Bryson had quick feet and has the ability to finish off blocks. Josiah is an all-around athlete. I saw on film that he played mostly running back. He has great vision and can play defensive end. We classified him as an athlete because he has quick feet and is good all the way around.”
Keaton said it is always good to come back home to get players.
“Obviously it is good to reach back and give someone the same opportunity you had,” he said. “It has been a while since I have been able to get back into W.S. Neal and sign anyone. Coach Hoehn has done a good job there training those players and has them doing well on and off the field and in the classroom. Both players had good grades and that impressed me and I look forward to having them here at Stillman.”