Mantel named Citizen of the Year 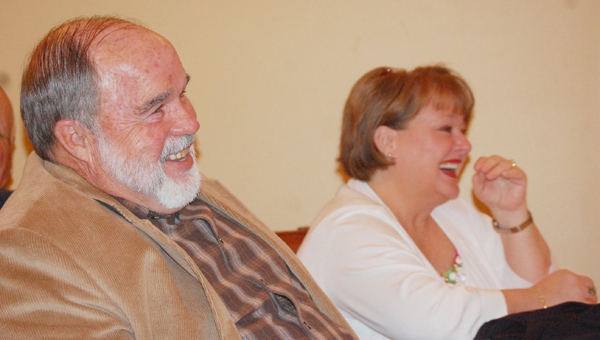 The long list of volunteer projects Durwood Mantel has led in Brewton and beyond were among the numerous reasons he was honored Tuesday night as the 2013 Citizen of the Year by the Greater Brewton Area Chamber of Commerce.

From rebuilding hurricane-damaged homes in Brewton to delivering wheelchairs in Costa Rica, Mantel has touched lives across the world.

“Our citizen of the year eventually retired from the mill, but not from work,” the Rev. Ed Glaize read from the nomination letter for Mantel. “He has a hobby of fixing up old cars, but his real hobby is serving others. He started out helping people who had their homes damaged by hurricane Ivan. He got the bug of doing work for others and he has taken off.”

As Ed and his wife Alecia Glaize continued the praises for Mantel’s work, Alecia Glaize said the honoree’s volunteer work had spanned the county, the state and even around the world.

“He is very active in the local Habitat for Humanity affiliate,” Alecia Glaize said. “He has participated in building six new homes for person in our local area. He took part in the Brush with Kindness program working with local Habitat volunteers as well as college students from Pennsylvania to spruce of three homes in East Brewton and two in Atmore for low income, elderly homeowner. He spent a week in Tuscaloosa as a volunteer construction leader with Alabama Association of Habitat Affiliate’s House United project in building homes for tornado victims”

Although Mantel is credited with projects around his home church of First United Methodist Church that has saved the church “thousands of dollars,” Mantel’s volunteerism and love of serving his fellow man had reached far beyond the boundaries of the city, Ed Glaize said.

“After Hurricane Katrina, he went to south Louisiana to help a family in Dulac get back into their home,” Ed Glaize said. “He traveled to the suburbs of Atlanta and built cabinets for a homeowner whose home was damaged by a flood. He braved the backwoods of Kentucky to put windows in the homes of poverty stricken families in rural Appalachia whose houses were ill prepared to face the cold of winter. He has taken two trips to Costa Rica to build homes with Habitat’s Global Village and he took another trip to distribute wheelchairs to handicapped persons in that impoverished nation.”

Ed Glaize said Mantel’s compassion and love for helping others has improved the community — and the world.

“Our church, Brewton, Escambia County and indeed our world are much better places because of the hard work and dedication of Derwood Mantel,” Ed Glaize said. “He is truly a hero who has helped many people. I can think of no person more deserving of recognition as Brewton’s Citizen of the Year.”

Mantel accepted the honor through laughter and gave credit to others in his life for making the honor possible.

“I am totally shocked,” Mantel said. “I did not get here by myself. There are people here who have helped me and the Lord helped me get here. Helping others is a part of my life now. I enjoy what I’m doing and was lucky to be able to retire early. It is touching to get this award. I really, really treasure this.”

Also during the evening, the annual Phillip Ellis and Donnie Rotch awards for Excellence in Achievement Awards were presented.

Receiving the Donnie Rotch award was T.R. Miller High School student Chandler Brown. Brown was chosen based on his participation in sports at T.R. Miller as well as the show choir, math team, Operation Santa Clause, volunteer work at the YMCA and for maintaining a 4.19 GPA during his high school career.

Receiving the Phillip Ellis award was W.S. Neal High School student Josh Kendall. Kendall was honored with the award for his participation in academic programs including Scholar’s Bowl, the yearbook staff, student council, Operation Santa Claus, community programs, as a member of the Youth Leadership group and for maintaining a 4.0 GPA through his high school career.

Damon Morgan, vice president of Power Supply for PowerSouth Energy Cooperative Inc. of Andalusia, was guest speaker for the evening and reminded area leaders to continue to work together to achieve what is best for the community, the state and the region.