Steering for a win 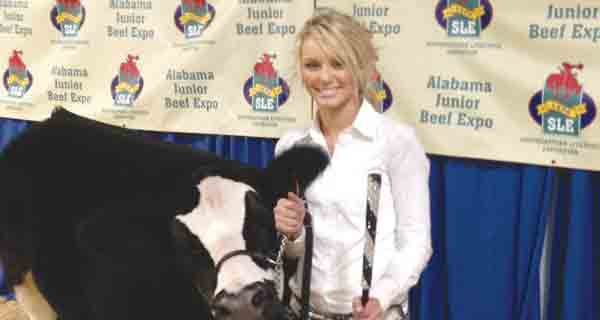 On any fall Friday night for the past three years, you could find Raven Beasley on the football field entertaining the crowd by twirling a baton with the W.S. Neal High School marching band.
But, on Saturday — and every other afternoon of the week — you’ll see her on the farm with her boots on and a stick in her hand as she trains livestock for shows around the region.
Beasley’s time with livestock has paid off with win after win at county, district, state and even national shows.
Just last week, Beasley took two county and district title-winning steers — John and Joe — to the Alabama Junior Beef Expo in Montgomery. That trip netted a grand championship win for John and a fourth place overall title for Joe, putting a few thousand dollars in Beasley’s pocket.
“It’s really nice to get that kind of win,” Beasley said. “The money is good and it’s helping a lot. I put some of the money I win into my college fund and use some of it to help pay for the next steer project.”
Those steer projects have been lessons for the entire family, Beasley said.
“I started doing this when I was in the ninth grade,” Beasley said. “My step-dad talked to me about it and I got interested. Phillip Ellis bought me my first steer. I kind of dedicate all of this to him.”
Veterinarian William Thompson is Beasley’s stepfather and has been a big supporter of her participation in steer shows for the past four years.
“My whole family has been very supportive,” Beasley said. “It has been a real learning experience for all of us. We’ve all learned a lot about the steer, the shows, the travel, the work and the expense of showing the steer. I couldn’t do this without their support.”
Beasley is the daughter of Melissa Thompson and Richie Beasley.
“My family is with me in all of this,” Beasley said. “My mom and stepdad, my dad and my grandmother are at every ball game and every steer show I do. I appreciate that.”
Beasley said she spends as much as two hours a day, every day in preparation of showing a steer at contests.
“I work with the steer every day,” Beasley said. “I have worked with three at a time. They are usually a little wild when I get them, but after working with them that much every day, I can just say ‘come on’ and they follow right behind me.”
Beasley said the steer become like pets, making it hard to part with them after they are shown.
“It’s really hard to let them go,” Beasley said. “I get really attached to them, but it’s all part of the plan. After the county show there is a sale. The buyer waits until I complete the show at state before they take the steer.”
Beasley’s success at steer raising and showing is something she said she never could have dreamed when she first embarked on the hobby.
“I wasn’t planning on winning as much as I do,” Beasley said. “I never saw it coming. This has given me a lot of happiness. Last week when I got to lead in the arena at the rodeo was exciting. It’s been wonderful.”