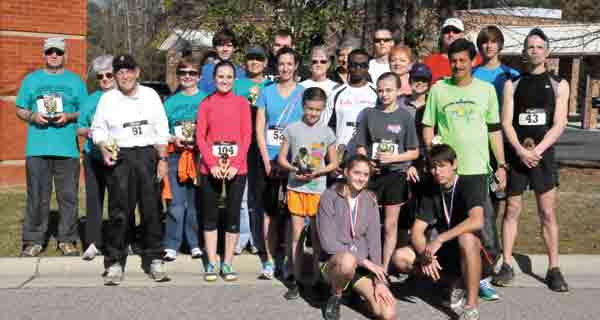 Christian Carlson took overall first place in D.W. McMillan Hospital’s fifth annual 5K Saturday morning held as a fund raiser by  the hospital’s Relay for Life team.
Karisa Nelson took second place and the first overall female while Harrison Horton took third place overall. Horton was the first place finisher in the 15-19 age group with a time of 21:05. Carlson’s time was 20:20 while Nelson’s time was 20:37.
Other first place winners in their age divisions included Travis Carlson (14U) with a time of 24:43, Rodney Floyd (20-29) with a time of 24:37, William Lyons (30-39) with a time of 22:16, Doug Darby (40-49) with a time of 21:23, Scott Nelson (50-59) with a time of 24:56, Joanne Dubose (60-69) with a time of 47:21, Johnny Miller (70-79) with a time of 51:22 and Robert Hayes (80-89) with a time of 50:48.
“I would like to thank all the people who attended the race and the businesses or individuals who sponsored the race,” Ruthie Cooper, organizer for the event hosted by the D.W. McMillan Hospital Relay for Life team, said. “Without their participation this would not have been such a success. It was a beautiful day for the race. Everyone seemed to have a good time and we are looking forward to bigger turnout next year.”
Other top finishers in the 14U division were Hayley Thompson and Tarah Thownson. In the 15-19 division, second place went to Dylan Godwin and third place to Dalton Evans. In the 20-29 division, Leah Huff took second and Jena Turner placed third. In the 30-39 age group, Kevin Bell placed second while Marina Thompson took third. In the 40-49 group, Jeff White placed second and Edith Kelley was third. Scott Huff and Marc Edge placed second and third respectively in the 50-59 division while Lois Crenshaw took second in the 60-69 division and Peggy Miller and Doris Morris tied for third. In the 70-79 group, Barbara Page took second and Ann Scott took third.