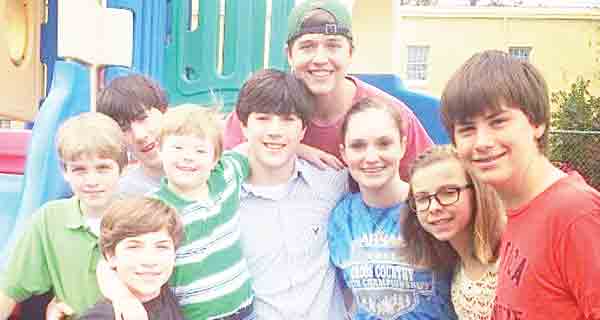 Chances are if you know Harrison Walton, you’ve received one of his hugs — and his church youth friends are hoping to make those hugs even more powerful as part of an awareness campaign starting this week.

Harrison is the son of Heather and Mark Walton and was diagnosed with Down syndrome shortly after his birth six years ago. He enjoys swimming, playing and being a part of the youth group at his church.

Claim Student Ministries, the youth organization at First Baptist Church, also enjoys Harrison’s membership in the group — so much so that they have decided to help bring awareness to Down syndrome in an effort to let people know the joys of knowing people like Harrison.

Randy Winton, youth minister for Claim Student Ministries, said the idea to bring attention to Down Syndrome was born through the teens in the group.

“The students just love Harrison,” Winton said. “Harrison is pretty famous for giving hugs and smiles to everyone around him.”

Having accepted Harrison for his disabilities, the youth wanted to do something to get people to understand more about Down syndrome, Winton said.

“Thursday is national Down Syndrome Awareness day and they wanted to do something,” Winton said. “The group has made fliers with information on Down syndrome to put in area businesses for people to see. They will be placing a bowl of Hershey’s Hugs next to the flyers. They are calling this their ‘Hugs from Harrison’ project.”

Harrison’s mother, Heather, said the project named for her son is one she fully supports.

“I just want to give a big thanks to the big hearts behind this project,” Heather said. “The kids love Harrison and he loves them.”

Heather said she didn’t know a lot about Down syndrome until she was given Harrison’s diagnosis shortly after he was born.

“I grew up with a cousin who had Down syndrome, but we never viewed her any differently,” Heather said. “I really had to educate myself on things for Harrison. Most Down syndrome people have trouble with vision and hearing. Harrison has some trouble with his hearing.”

Walton said that once children learned more about his condition, they understood more about him — and she hopes that the flyers will bring even more awareness.

“The Bible students thought he just wasn’t listening sometimes or that he just wasn’t communicating with them,” she said. “But once they knew it was because he couldn’t hear them, they understood and began to work on better communication. That’s all it took — better understanding of the situation, and so much can grow from that.”

Winton said Down syndrome is the focus for the youth group’s current project, but the Claim Ministry students are always working.

“The students are aware of social issues and they are forever trying to figure out ways to make a difference or have an impact about those issues,” Winton said. “I’m really proud of the students for that. We have some great moms and dads who are raising their children right.”

Heather said she is happy to see that more information is being given concerning statistics of Down syndrome and those it affects.

“Down syndrome is the most under-funded disability in the United States,” Heather said. “By learning more about Down syndrome, people can become more comfortable with the Harrisons of the world. By being able to be more accepting of them in society, they would be able to hold jobs instead of being dependent on others and being institutionalized.”

Harrison’s grandmother, Anita Watson, said the project by Claim Ministries is further proof that a higher power has his hand on Harrison and others like him.

“This is God’s love in action,” Watson said. “We can all learn how important each and every life is to Jesus and to see each other through His eyes. How fitting that this happens during this time in our Christian year as our attention turns to the price that Jesus paid for all of us on the cross. Thank you from the bottom of my heart.”

Look for “Hugs from Harrison” information around town in recognition of National Down Syndrome Awareness Day Thursday.

For more information and statistics about Down syndrome, visit the national Web site at NDSS.org.