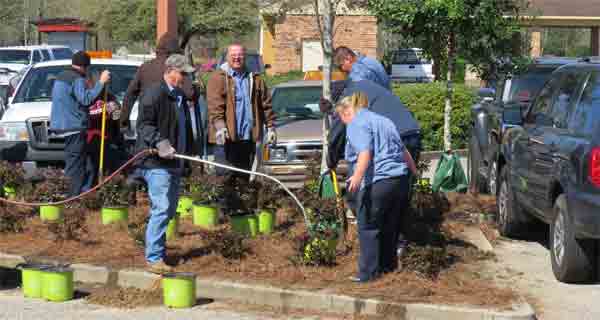 City workers plant more than 150 rose bushes Monday as part of a beautification process throughout the city.

More than 100 rose bushes were planted in a tiny area of Brewton this week as a plan to spruce up the downtown area continued.
Tree and Beautification Board Member Bob Hayes orchestrated the planting of the bushes along the boardwalk area downtown.
“The bushes are being planted in the area where some trees were taken down last year,” Hayes said. “They will also be placed in other beds throughout the parking area there as well.”
Hayes said the bushes are not in bloom at the moment, but are a variety that will produce beautiful flowers in the months ahead.
“They will probably begin blooming in the next week or so,” Hayes said. “These are the Knock Out roses and that is a variety that will bloom right on through the fall.”
A group of City of Brewton workers were on hand Monday as the roses were delivered and prepared for planting under Hayes’ direction.
The work done this week along the boardwalk area of downtown is only part of a plan to bring beauty to the city.
Last week, a building located at the edge of Burnt Corn Park along U.S. 31 was painted in an effort to make the site less obtrusive in its surroundings.
Work is also continuing on for plans to beautify areas that lead into the city to be more attractive to those coming into town.
Areas being focused on for the upgrades and beautification include the downtown area as well as the U.S. 31 and 29 corridor and Alabama 41 corridor; the Sowell Road corridor; Burnt Corn Creek Park; Alco family park; and the gateway at the bridge to East Brewton.
Plans had been made to plant a variety of wildflowers along the edge of U.S. 31 at Burnt Corn Creek Park with the help of volunteers. However, weather conditions during the planned planting time were not conducive to success for the project. The planting project will be completed in the near future, officials said.