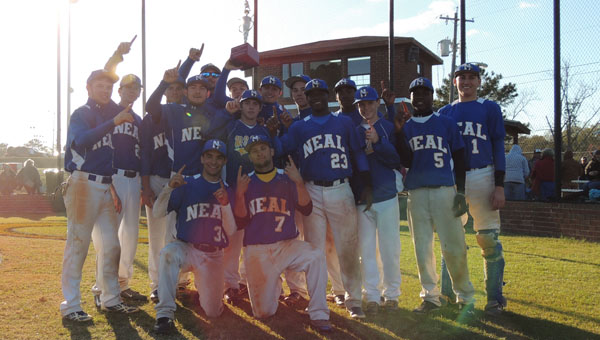 In their final game of the Opp spring break tournament Tuesday, it looked like the perfect undefeated season for the No. 1-ranked W.S. Neal Eagle baseball team was over.
After blowing their lead in the sixth inning, the Eagles trailed Brewbaker Tech 8-6 in the bottom of the sixth.
After cutting the lead to 8-7 after a sacrifice fly by Damion Williams that scored Malcolm Hawthorne, things began to click for the Eagles in their half of the inning that helped them stay undefeated and move to 16-0 this season with a 10-8 win.
With Christian Purvis on second base, Brian Settle reached base on an error to give the Eagles new life with two outs. After Settle took second base, Dylan Godwin launched a three-run homerun to give the Eagles their 10-8 lead and they were able to hang on for the two-run win and take first place and the tourney championship in Opp.
“Playing in the Opp tournament was good for a lot of reasons,” W.S. Neal head coach Coy Campbell said. “One, if we end up making the playoffs we got a chance to see Opp and Straughn. We would match up with them in the first round either with us at home or traveling. It just gave us a chance to see them.”
Campbell said his team played well in the two-day tournament in Opp.
“We played pretty well on Monday against Kinston and then we came back on Tuesday and we had Opp who is a ranked team,” he said. “I thought Cam Blackman threw the ball real well. We did not swing it all that good, but we did enough to score some runs and win the game. I was proud of the way we played defense because I don’t think we made an error that game.”
Campbell said the comeback win over Brewbaker was a good game for his team to play in before the late area games that will have playoff implications.
“We then played Brewbaker and we have been needing a game like that pretty much all year,” he said. “The kids faced a little bit of adversity. We got down late and we came back in and got some big hits and Dylan Godwin hit a big three-run homer to put us back up. Keith Bradley came back in the seventh inning after he replaced Brian Settle and he was a lot different pitcher in the seventh inning than he was in the sixth. I think he just had a different mindset when he came back out. I just told the guys after the game that it was a good win for us, but me being around them since the ninth grade or eighth grade for some of them, I know what I am going to get the best with these guys.
“They give me everything that they have got until it is all said and done. And that is what is special about this group this year. They play hard every time they go out whether it is a game or practice. They give me what they got.”
In the back-and-forth contest Tuesday, the teams combined for 23 hits, including seven extra base hits. The teams traded runs for most of the contest, leading to five lead changes in the game.
Keith Bradley recorded the win for W.S. Neal. He allowed one run over 1 1/3 innings.
Bradley struck out two, walked one and gave up four hits.
W.S. Neal was sparked by Godwin and Williams, who teamed up for three hits and five RBIs. Williams had a double and Godwin had the three-run homerun.
W.S. Neal Varsity jumped out to an early 3-0 lead in the bottom of the first. Brewbaker Tech then scored two runs in the third inning, and then followed it up with two more in the fifth to tie the game at 4-all after W.S. Neal scored one in the fourth.
After W.S. Neal took a 6-4 lead heading into the sixth, Brewbaker scored four runs in the sixth to take the 8-6 lead before the Eagles scored four of their own to take the lead and eventually take the win.
Settle started the game on the mound for W.S. Neal and went 5 2/3 innings and allowed eight hits, seven runs, four earned, walked four and struck out 11.
Purvis had two hits for W.S. Neal along with Jeremy Myers. Settle was 1-for-4 and Tyler Joyner was 1-for-3. Cam Blackman had two hits. Settle and Joyner had one RBI each.
On Monday in Opp, W.S. Neal took down Kinston 15-1 and won their first game Tuesday morning over Opp 6-0.
W.S. Neal’s JV team will host Greenville in a doubleheader Monday. Game time is set for 4 and 6 p.m.
The JV and varsity teams will play Monroe County Tuesday at home at 4 and 6 p.m.
On Thursday, W.S. Neal will play at T.R. Miller at 5 p.m. in an area series before hosting the Tigers Friday for a 4 and 6 p.m. doubleheader.