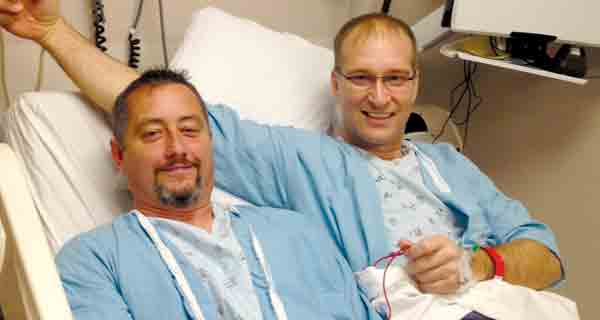 When the call came for help, Terrence Breckenridge didn’t hesitate one moment at the chance to give a kidney and restore the hope for a long life to his brother-in-law, Benny Boyd.

“When my sister-in-law called to tell us that Benny would need a kidney transplant I was ready,” Terrence said. “I told them ‘you don’t need to make any more calls. I got you covered.’ I never had any doubt or questions about giving him a kidney.”
Breckenridge began extensive testing through the Mayo Clinic in Minnesota to determine the compatibility, if any, with Boyd, who is not a blood relative.
“Every meeting with the Care Team there was good,” Terence said. “Mayo Clinic is a teaching and training facility and they do a lot of testing because they want success.”
Success may be a goal for the Mayo Clinic transplant team, but success was Boyd’s only shot at a normal life, Terrence said.
Terrence’s wife, Becki, was right by her husband’s side through the entire process — from the phone call to completion.
“About three years ago, Benny began having renal failure,” Becki said. “In February of last year, he went on the transplant list. Kidney function has to be below 20 percent before insurance will cover a transplant and to be put on the list.”
Terrence said the nearly yearlong process from testing to transplantation was filled with plenty of opportunities to back out of the deal.
“All during the testing, there are evaluations of every thing imaginable,” Terrence said. “There are even psychological evaluations and the team reminded me this was required of me as a person. They would say ‘you know you don’t have to do this’ but I was determined to help if I could.”
From check in to surgery and home again, took Terrence and Becki two weeks to see through.
“The surgery was done on March 13,” Becki said. “They are both doing great. Benny is still at the Mayo Clinic being tested every day to make sure things are going well.”
Terrence said the hours following the surgery gave him a glimpse at what he had done for his brother-in-law.
“I was back in my room by about 4:30 that afternoon,” Terrence said. “He got back to his room around 7:30 that night. When I went to check on him, he was awake and seemed to be more concerned about me than himself.”
Becki said her husband’s determination to see Benny following the transplant was inspiring for her and for others at hospital.
“He got up and walked across two wings to go check on Benny,” Becki said. “The first words out of Benny’s mouth when he walked into the room were ‘thank you’ — it was amazing.”
Terrence said his recovery is going well with just a little soreness, but he is better every day.
Although Benny’s recovery may take a little longer than that of his donor, Terrence said improvements began immediately.
“Of course, testing goes on all the time before and after procedures,” Terrence said. “Benny’s kidney function was up to about the same as mine within a day of the surgery.”
Terrence said he changed his lifestyle in anticipation of giving the kidney to his brother-in-law.
“I drank a lot of water and cut out caffeine,” Terrence said. “At one point, after one test, I was taken off the donors list. It broke my heart and I cried like a baby. I begged to be given another chance. Thankfully, I was able to get back on the list.”
Terrence said he did give his decision a lot of thought during the whole process but never had a doubt he was doing the “right thing.”
“In praying about all of this as a Christian I knew this was right,” Terrence said. “I know Benny believes in and is seeking God. I know his heart and have no reservations about this at all.”
Terrence said the experience has been eye opening, giving him a better love for life and the simple things found in daily living.
“This has just been a very humbling experience,” Terrence said. “It reminds you of all the things we take for granted every day.”

Health rankings: County has work to do