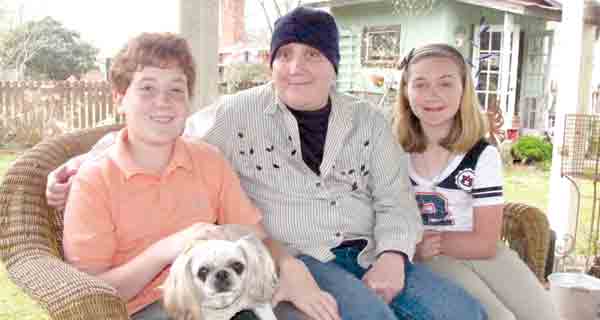 When the winning name was drawn at the Brewton Chamber of Commerce for this year’s Big Buck hunting trip contest, chamber board member Andrew Clark thought that was that. But when Clark found out the winner was 13-year-old Patrick Hammonds of Atmore, things changed dramatically.
Hammonds, an avid hunter, hasn’t spent as much time in the woods this year, as his mother Kim was diagnosed with a rare form of breast cancer in October of 2012 – a prognosis his entire family is still struggling to cope with.
“A situation like this is exactly why we created this contest,” Clark said. “When we found out about him and his mother we thought, ‘this is perfect.’ We had a smile on our faces and a tear in our eyes. Of anyone that we could have been pulled for this, I’m glad it was him. Of the 68 names, he was the one that needed to get pulled.”
The trip Patrick won when his name was randomly drawn in Brewton, was an all- expenses paid hunting outing with Eagle Lake Outfitters in Illinois – a package worth thousands of dollars. What he, and his family, got once Eagle Lake owners Ted and Tina Sprauge learned of his story, was an outright family get away for himself, Kim, his father Larry and sister Madison.
“He’s pretty much going to be catered to,” Tina Sprauge said. “We decided once we heard the story, which brings tears to my eyes just thinking about it, to kind of have a family get away for them. They’ll have their own little cabin and everything.”
Sprauge said it was a call from Clark that got the ball rolling for the collaboration between her outfitting company and the Brewton chamber and, ultimately, allowed for the opportunity to give the Hammonds family a much-needed break from everyday life.
“(The Hammonds’ trip) is the second weekend in December,” she said. “It is our second year doing this with Brewton. Last year we did one hunt, but Andrew Clark called me out of the blue last July and we talked and then this year we decided to do two.”
Clark said it seems serendipitous that the two organizations came together when they did.
“I met Ted and Tina last year and they probably wouldn’t be a part if it had not been for the Catch a Dream Foundation that they are involved in,” Clark said. “What’s kind of ironic is about half the money we raise goes to the Catch a Dream Foundation that is based in Mississippi.”
Clark said it is because of the Sprauge’s giving spirit that he was not surprised when they upped the awards package for Patrick after hearing of his family’s struggles.
“They are really nice folks,” he said. “I sent them the email from Dale Ash (co-owner of Brewton chamber sponsor Pepsi Cola Bottling Co.), who kind of gave us some info on the situation with his mom. They called me about an hour later and said, ‘hey we want to give more.’”
Clark said, in total, the Sprauges have donated around $10,000 in free hunts to the Brewton chamber’s cause.
Larry Hammonds, Patrick’s dad and chief of police for the Poarch Band of Creek Indians Police Department, said the hunt gives his entire family something to look forward to – a much needed morale boost as they have only recently returned from Houston where Kim underwent new cancer treatments.
“They called us one night and put (Clark) on speaker phone and Patrick talked to him,” Larry said. “We thought it was joke at first. The next evening, I walked in the house and my phone rang and it was Mr. Clark. He said, ‘look, we called the outfitters and we explained things to them and we want to make this special and step it up so they’re going to do the hunt and the trip for the whole family.’”
Larry said the only problem now is keeping Patrick occupied in the months prior to the trip.
“He’s calling everyone,” Larry said with a laugh. “He wants to go ahead and get everything he needs ready to go. I keep telling him, ‘son, we still have a couple of months. We have time.’ He’s just really excited.”
The Hammonds will depart for Pike County Illinois in December.