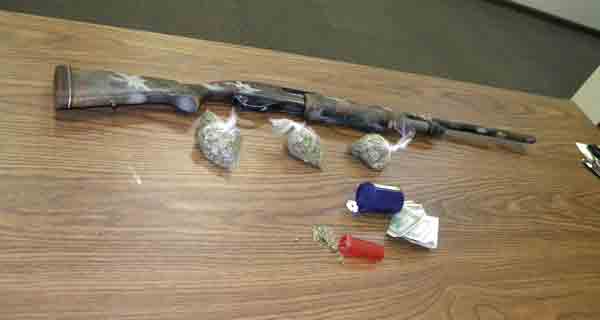 A father and daughter were both arrested by East Brewton police this week and are now facing drug charges, officials said.

East Brewton Police Officer Russell Clausell said information concerning a grand jury warrant for Madden’s arrest was received at the department and that the suspect had been spotted inside East Brewton’s city limits.

“We attempted to make a traffic stop on the vehicle Madden was traveling in near Superfoods,” Clausell said. “The driver, who we identified as Mr. Fleming,  refused to stop until he reached the point near the Old Willie’s restaurant location in Brewton. We were able to have Madden exit the vehicle at that point.”

Clausell said as Madden exited the vehicle he noticed a plastic bag containing what appeared to be marijuana in front of the driver’s seat of the vehicle.

“At that time, we asked the driver, Mr. Fleming, to step out of the vehicle,” Clausell said. “A search revealed he had a small bottle in his pocket that contained marijuana. We then began a search of the vehicle and found pills in Ms. Madden’s purse, three bags of marijuana and a loaded shotgun.”

Clausell said the marijuana found in the vehicle weighed about three ounces. A large sum of cash was also recovered during the search, he said.

Both Madden and Fleming were transported to the Escambia County Detention Center where they were booked on the charges against them.

No bond information was immediately available.