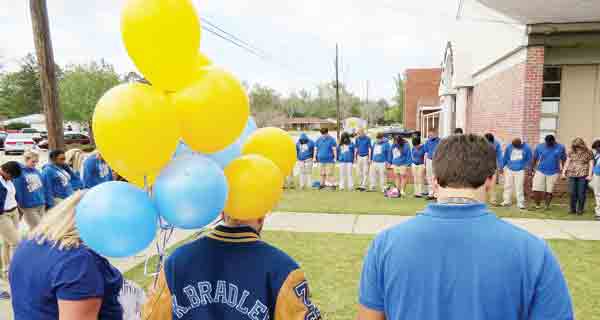 Blue and gold balloons filled with bits of paper holding written memories of Chase Kaylor were released Friday afternoon by seniors at W.S. Neal High School in East Brewton.
Kaylor, who was killed Thursday morning in a two-vehicle crash, had been a member of the class of 2013 at the East Brewton school until his transfer to Sparta Academy in Evergreen last year, school officials said.
Principal Patricia Frazier said the students were told of Kaylor’s death at the school Thursday.
“This is a sad loss for us and we are very saddened by Chase’s death,” Frazier said. “It has been a rough couple of days at school for everyone. His classmates here are devastated. He was well liked by his peers, his teachers and the administration here. He was just an all-around great kid.”
Frazier said the students began considering ways to memorialize Kaylor and make him a part of the prom celebration set for tonight at the school. “The seniors immediately began talking about ways to remember Chase,” Frazier said. “They talked about getting bracelets made as a memorial to him. They contacted Thou Art to see about the cost for the bracelets. Thou Art (owner Emmie Jernigan) called back to let them know there was a private donor taking care of the cost of the bracelets for each of the seniors.”
Following the release of the balloons Friday, each senior received a black leather bracelet adorned with a small, silver cross in memory of Kaylor — jewelry they plan to wear to this year’s prom.