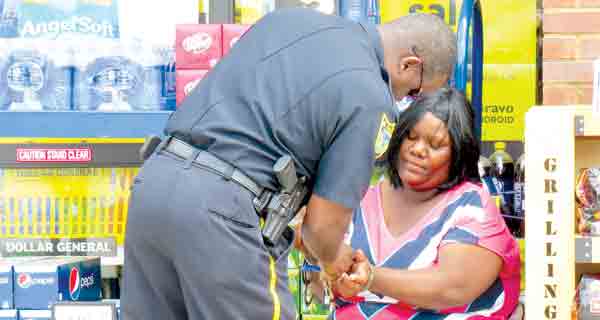 Three women – all Jackson residents – were arrested in East Brewton Monday afternoon and charged with third-degree theft of property stemming from alleged shoplifting activity.
Santana Levelle Jenkins, Shauntae Iesha Hollins and Katie Schadell Besteda sat handcuffed on the sidewalk in front of the East Brewton Dollar General location as officers sifted through the items discovered in their vehicle.
Officer Russell Clausell said there may be other arrests in the case as well.
“When we arrived, there were two male subjects in the back seat of the vehicle,” Clausell said. “Both males fled from the area as we began the investigation.”
Clausell said the three women admitted to the shoplifting accusations at the East Brewton retailer as well as two other Dollar General locations in Brewton.
“We notified Brewton police about the incident,” Clausell said. “They are also on the look out for the two unidentified males seen at store in the vehicle.”
Clausell said the females said the items being taken were being given to others who said they needed the items.
“The things taken were all dorm-room kind of items,” Clausell said. “Things like t-shirts, laundry detergent and other similar items.”
The three women were transported to the Escambia County Detention Center where they were booked on the charges filed by East Brewton police.
Clausell said other charges from the alleged crimes committed in Brewton by the trio is expected.
You Might Like

Two Brewton area families are mourning the deaths of their loved ones after a tragic crash in Conecuh County killed... read more