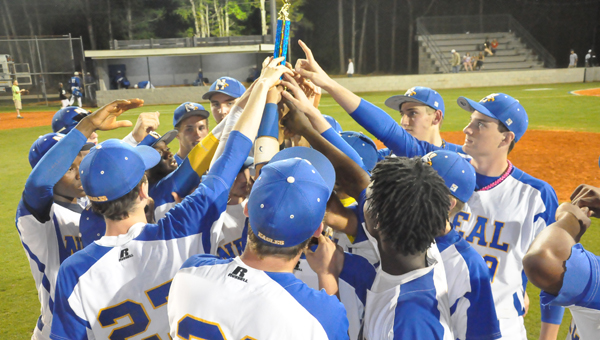 For the third straight year and the fourth year in six years, the No. 1-ranked W.S. Neal Eagle baseball team clinched an area title Friday night at home against the Bayside Academy Admirals.
W.S. Neal rolled to an 8-1 win over the Admirals to clinch the 3A area 1 championship and moved to 22-0 with the win. Saturday at Bayside Academy, W.S. Neal finished off their perfect regular season as they moved to 23-0 with an 11-0 win over Bayside in six innings. The Eagles are the only undefeated team in the state this season.
“It was a big win,” W.S. Neal head coach Coy Campbell said Friday night. “It clinches the 3A area title and puts us home in the playoffs for round one and that is big. I am just extremely proud of these kids. They have played hard all year and they brought it out again tonight. That is three straight area championships for the seniors. We won it twice in 4A in 2011 and 2012 and we dropped to 3A and won it again this year. (WSN also won it in 4A in 2008). It is big for these seniors. They have put a staple on this program and it is just going to benefit these younger kids coming up. It creates a winning tradition.”
In the win Friday, senior Brian Settle helped the Eagles to the win on the mound as he went 6 2/3 innings and allowed one run on four hits, walked three, hit one and struck out 11.
Keith Bradley went the final 1/3 of an inning and struck out one.
“Settle threw well on the mound for us tonight,” Campbell said. “He stayed down in the zone. The biggest thing is that in his last three outings, he has not been really good. Tonight, he strikes out 11 and walks two and I am upset. At the same time, I know what Brian can do. He got ahead early in the counts and his pitch count was down tonight for the most part. He just gave us a chance. I knew when we scored three runs early we had a chance the way we have been playing defense. We have not been giving up many runs.”
Bayside’s lone run came in the sixth inning while the Eagles plated three runs in the second and fourth innings and two more in the sixth.
At the plate, Christian Purvis had a double and a single and two RBIs while Jeremy Myers had three singles and four RBIs.
Damion Williams and Settle had one single each while Settle had one RBI. Tyler Joyner added a single along with Miles Powell. Cam Blackman had a double.
In Saturday’s game, W.S. Neal blanked the Admirals 11-0 and pounded out 12 hits while holding Bayside to three. W.S. Neal scored four runs in the second to help aid in the win.
At the plate, Purvis had two doubles and three RBIs and Blackman had a double and one RBI. Myers, Williams, Settle, Joyner, Powell and Bradley all had hits with Williams, Settle, Joyner, Blackman, Powell and Bradley all had RBIs.
On the mound, Blackman earned the win going four innings and allowed no hit, no runs, walked four and struck out one. Bradley went four innings and allowed three hits, one walk and struck out two.
As area champions, W.S. Neal will host Straughn Friday in round one of the class 3A stats playoffs. Game time is set for 5 and 7 p.m. Friday. If the two teams split Friday, a third and deciding game will be held Saturday in East Brewton at 1 p.m.