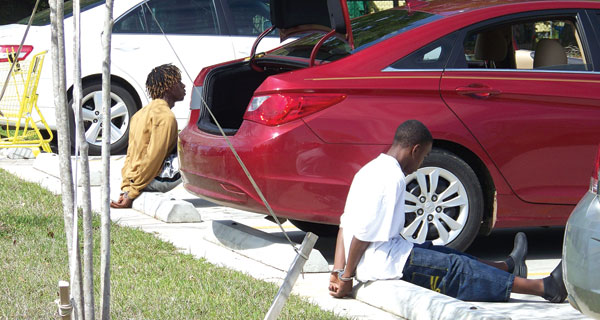 Suspects in an East Brewton drug arrest wait in handcuffs as their vehicle is searched.

Four suspects — two from Brewton and two from Atmore — are facing several drug charges after East Brewton police acted on tips from the public.
East Brewton narcotics investigator Russell Clausell said the arrests were the result of weeks of surveillance into alleged illegal drug activity at Summer Chase Apartments in East Brewton.
“We had received several complaints that drug activity was taking place at the complex,” Clausell said. “I began surveillance in the parking lot of the apartments to try and narrow down the location of the activity.”
Clausell said the surveillance allowed him to watch subjects at the complex and note their activity.
“During my observation, I noticed a black male pull up and go into one of the apartments being watched,” Clausell said. “In approaching the apartment, a strong odor of what was believed to be synthetic marijuana was noticeable coming from the residence.”
Clausell said the male subject he had been watching then left the apartment and returned to a vehicle where three subjects were waiting.
“As they left the complex, I initiated a traffic stop on them at the Dollar General store on Forrest Avenue,” Clausell said. “As I approached the vehicle, there was a strong odor of marijuana coming from the vehicle.”
Clausell said a search was conducted on the vehicle uncovering 39 bags of marijuana, a separate bag containing an ounce of marijuana, 20 bags of synthetic marijuana, scales typically used to weigh drugs and a large some of money.
Arrested at the scene of the traffic stop were Ronald Pettway and Emanuel Johnson of Atmore and Deandre McCaster and Antwaneque Johnson of Brewton.
Each of the suspects was charged with first-degree possession of marijuana; possession of a controlled substance – synthetic marijuana/spice; and possession of drug paraphernalia.
All four suspects were transported to the Escambia County Detention Center where they were booked on the charges against them.