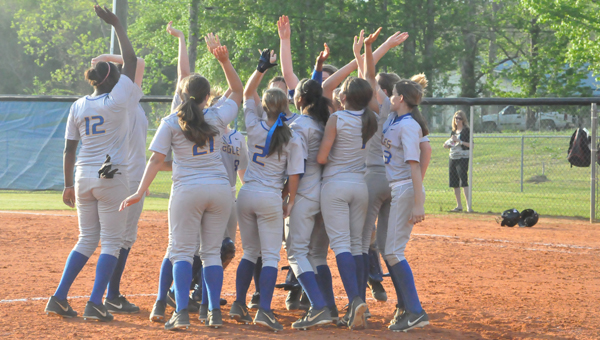 All year long, the W.S. Neal Lady Eagle softball team has been plagued with lack of hitting. Thursday at home against rival T.R. Miller, that all changed.
The Lady Eagles pounded out 11 hits and used a six-run sixth inning to break the game and take a 10-4 area win over the Lady Tigers of T.R. Miller.
With the win, W.S. Neal improved to 12-9 overall and finished their area scheduled with a 5-1 record. The win was the fourth straight over T.R. Miller dating back to last year and clinched the regular season area title for the Lady Eagles and gave them the right to host the area tournament later in the month.
“It was kind of an up and down game,” W.S. Neal Lady Eagle head coach Jeff Haney said. “There was a lot of good and there was a lot of bad. We finally hit the ball. We also made 10 errors or more. There were some good and bad in all of it and if we can get it all together, nobody is going to beat us. Kaitlin (Hadaway) pitched a great game and the bats came around. It is always great to beat Miller. We started that last year and we have kept it up and I don’t plan on stopping.”
The up and down Haney eluded to was after his team built a 3-0 lead after three innings—one run in the second and two in the third—T.R. Miller cut the lead to 3-2 in the top of the fourth after the Lady Eagles made five errors in the inning.
With their lead cut to one, W.S. Neal batted around in the bottom of the sixth inning and pounded out six runs on seven hits to take a 10-2 lead. The Lady Tigers added two in the top of the seventh to get within 10-4, but W.S. Neal was able to hang on and get the win by six.
“We just didn’t play a complete game,” T.R. Miller Lady Tiger head coach Greg White said. “We did good at times, but we just couldn’t make that play when we had to have it and didn’t get that hit when we needed to hit and have. They did. That is the difference. The sixth inning was pretty ugly, but I give them credit. They hit the ball when they were supposed to and we didn’t and here we are.”
Hadaway earned the win in the circle for the Lady Eagles as she went the complete game seven innings and allowed two hits, four runs, none earned, walked one and struck out two.
Moriah Brundidge took the loss for T.R. Miller as she went 5 1/3 innings and allowed 11 hits, 10 runs, walked eight, stuck out seven and hit one. Laurel Billy went the final 2/3 of an inning and allowed no runs and no hits.
At the plate for T.R. Miller, Kelsey Thompson had a single and Jessica Allan had a double. W.S. Neal made 12 errors in the win.
For W.S. Neal, Kena Ellison had two singles and three RBIs while Tori Wyatt had a single and one RBI. Kaeli Brown had two singles and Haleigh Dubose had a single. KeKe Floyd and Erin Hartsel had a single each with Floyd having two RBIs and Hartsel having one. Madison Winchester had three singles and one RBI in the second inning.
T.R. Miller fell to 10-8 and finished 3-3 in area play.
T.R. Miller and W.S. Neal will both play in the Escambia County softball tournament that was scheduled to start Friday. The two teams are scheduled to meet—unless Friday’s weather in the area changed things— at 1:15 p.m. Saturday.
“We are going to get them (T.R. Miller) again this weekend (in the Escambia County softball tournament) and we are going to try and do it again (win the tourney championship two years in a row),” Haney said. “We have the county tournament coming up. We won it last year and we plan on winning it again. That is our goal for the next days. We also get to host the area tournament when it comes time. That is exciting. That has never been done here. It is something that I am glad to see our seniors go out like that, but it does not mean anything if we don’t make it into the playoffs. We have to take care of business. These girls are working hard and we are improving everyday. We are just going to keep going.”
Update: The softball tourney at JDCC will begging at 9 a.m. Saturday after Friday’s games were cancelled.