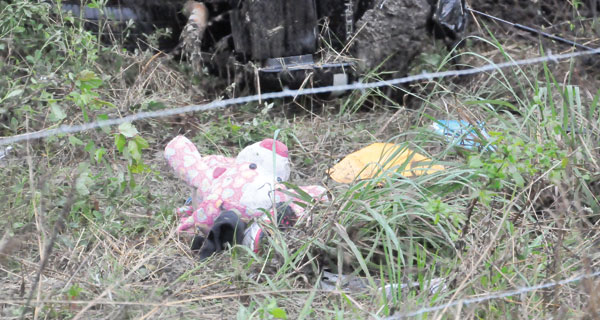 A child’s pink stuffed animal lay near the wreckage of a truck after a one-vehicle accident Friday morning on Alabama Highway 41 north of Brewton. Alexis Pugh was killed in the wreck.

A Brewton Elementary School kindergarten student remembered as “kind and loving” was killed Friday morning in a one-vehicle wreck on Alabama Highway 41.
Alexis “Lexi” Pugh, was pronounced dead at the scene of the crash, state troopers said. Her mother, Lisa Hart, 27, of Brewton, was driving the 1996 GMC Jimmy, which left the road and overturned, troopers said. Christopher Dean, 31, of Repton, was also a passenger in the vehicle. Both were injured in the crash and transported to D.W. McMillan Hospital for treatment.
Brewton Elementary School officials said the school community is mourning Lexi’s death.
“Lexi was a very special child,” kindergarten teacher Chastidy Johnson said. “She was very kind and loving with all her words and actions. I’ll bet that she said ‘I love you’ ten times a day just to be sure that I knew that she meant it. She was very much a girly-girl as well. She loved to prance around in her favorite boots. She was like a flower from God. I am truly thankful that I was able to enjoy her abundant beauty while she was with me. I loved her very much, and we will miss her greatly.”
BES Principal Ann Lambert said the entire school was saddened..
“She was a sweet child that enjoyed school and she will fondly remembered,” Lambert said. “We will miss her. Our hearts are full for her family and those that loved her.”
According to information released Friday by Alabama State Troopers, seatbelts were not in use at the time of the crash. Although the investigation is continuing, troopers said speed was a factor in the crash.
Funeral service information was not complete as of press time Friday, but Williams Memorial Chapel Funeral Home will be in charge of arrangements.