City plans include growth for downtown 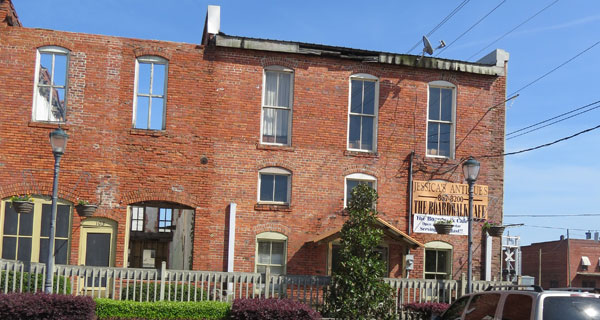 Shells of buildings or those in disrepair in the downtown district, like those shown here, were part of a discussion aimed at finding solutions for revitalizing the downtown area.

Former downtown business owner Kathy McMillan remembers riding her bike downtown when she was a child — and she said there is a critical need to bring life back to downtown and help businesses flourish.
“Downtown is the character of our town,” McMillan said at a Wednesday workshop to discuss ways to revitalize Brewton. “There is nothing, shopping center wise, that draws me there. Downtown is where our childhood memories were, when we would ride our bikes to town every Saturday. Every memory of that I love.”
A group gathered in the conference room at Brewton City Hall was focused on improving downtown area to attract new business, new customers and new life.
“Downtown, as we’ve taken in a feel for the city, appears to have moved commercially,” said Cathy Gerachis, director of architecture and planning with design firm Goodwyn Mills and Cawood. “What has happened to downtown here is no different than what’s happened in downtown Montgomery.”
Goodwyn Mills and Cawood is evaluating four areas in Brewton — downtown, Alco, Sowell Road and parks and gateways — to come up with a design plan for the city.
Gerachis said plans can be made that would help to revitalize the downtown area that will improve traffic and accessibility through the area.
Downtown business owner Sammy Weaver said the current traffic flow for drivers in the area makes it a chore to visit some downtown business.
“People have really got to want to get to Weaver’s right now,” Weaver said. “We need to see how that can change. People attract people and when there are no cars, there are no people and then, no business.”
Weaver said with industry sites and a railroad situated in the downtown district, some possible business improvements may be hampered. Gerachis agreed.
“It’s not uncommon to see a railroad going through a town,” Gerachis said. “It’s more uncommon to have heavy industry in the downtown area. There are environmental consequences of industry downtown and we need to make the right moves when addressing those issues.”
And Gerachis said downtown needs more than just retail business to keep a flow of customers interested in the area.
“A cluster of restaurants is always helpful to ensure that repeat customer,” Gerachis said. “When they visit the restaurants, other businesses get a second or third look.”
Weaver said there had been a string of dining businesses that have made an attempt at being a part of the downtown district.
“We’ve had some to try,” Weaver said. “Why can’t we get one that lasts? They just can’t stay there because the people just don’t support it.”
McMillan said some hindrances to keeping a business profitable could hinge on costly power bills each month.
“Our power bill ran between $1,200 and $1,500 a month,” said McMillan, who was a partner in the Book and Bean coffee house and restaurant. “It’s hard to keep going with bills like that.”
One other point Gerachis made is the condition of buildings downtown.
“If a building has structural issues, there will be consequences,” Gerachis said. “It’s really critical to maintain the buildings you have now.”
Weaver said some of the downtown buildings have experienced disasters over the years that have contributed to the condition.
“Even though I’ve been through three or four floods, I still like where my building is and I love my building,” Weaver said.
With that information, Gerachis said upkeep, maintenance and repairs to buildings are even more critical.
Brewton leaders and concerned citizens will continue to evaluate needs and possible solutions in follow-up meetings and planning sessions over the coming weeks.