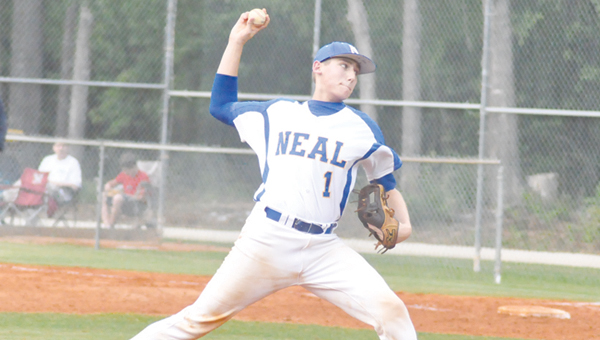 It was a new round Friday night at home for the No. 1-ranked W.S. Neal Eagle baseball team, but it was the same result — a sweep and their 28 and 29th wins of the season — and it came in dramatic fashion.

The Eagles of East Brewton took care of business in game one against American Christian in the class 3A AHSAA state quarterfinals, earning a 7-1 win to improve to 28-0.

In game two, the Eagles built a 4-0 lead through the top of the seventh but had to hang on for dear life in the bottom half of the inning.

After a leadoff strikeout, the Patriots of ACA benefitted from a hit batter, a double that cut their deficit to 4-1, two walks and a single that left the game at 4-3.

With runners on second and third, the Eagles got a Patriot runner out for the second out of the inning, but still ended up with runners at second and third with two outs in the inning. With a full count on the Patriot’s No. 3 batter, Tyler Joyner got a strikeout to end the game and preserve the one-run win and the undefeated season for the Eagles.

“It was intense and a lot of pressure,” Joyner said. “I knew I had a great defense behind me, so I just threw the curveball. I knew if he hit it, my defense was behind me, and they would play for me.”

W.S. Neal head coach Coy Campbell was breathing a lot easier once the final out was made in the Eagles’ favor.

“Man, it was a great baseball game,” Campbell said. “You have to give a lot of credit to American Christian. They could have laid down when it was 4-0, but they fought back. It is a great bunch of kids and their coach is a very good guy. What can you say about the Blue Eagles man? They just don’t quit. There are more people looking out for us than just us. That play Tyler (Joyner) makes…that is usually a base hit in high school nine out of 10 times. Good teams win games like that and we are still winning so far.”

Neal’s experience and depth has been key to its success this season.

“In game one, Brian (Settle) only throws three innings in two games,” Campell said. “That is unusual for us. That just shows the depth we have on the mound. Our three guys threw well. We swung the bats and got some runs and we did what we needed to do. We played good defense. It is just a pair of great wins today.”

With the win, W.S. Neal will advance to play the winner of Trinity and Slocomb next week in the semifinals. Trinity won game one over Slocomb and was leading game two before it was postponed to noon today due to rain in the area.

“There are only four teams left, and we are one of them,” Campbell said. “Why not us?”