WSN softball claims area championship with 4-3 win over TRM; both WSN and TRM advance to regionals in Gulf Shores 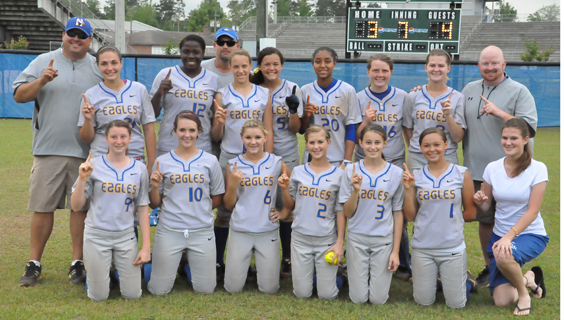 The 2013 softball season for the W.S. Neal Lady Eagles has been a season of firsts.
It started with senior Kaitlin Hadaway being the first softball player at W.S. Neal to sign a college softball scholarship to play at JDCC next year. From there, the Lady Eagles won the first ever regular season area championship and the right to host the first ever area tournament in East Brewton.
Thursday saw two more firsts for the Lady Eagles as they defeated Cottage Hill 4-1 to clinch the program’s first berth in the south regionals next week in Gulf Shores.
Then, in the championship game of the area tournament, the Lady Eagles defeated T.R. Miller 4-3 to go 3-0 in the area tournament and win the class 3A area 1 championship for the first time in school history. The championship is also thought to be the first female championship of any kind at W.S. Neal High School.
It was the third straight defeat this season for W.S. Neal over T.R. Miller and fifth straight dating back to two wins in 2012.
“That was one of our goals was to make it to Gulf Shores,” W.S. Neal head coach Jeff Haney said after defeating Cottage Hill and clinching the Gulf Shores berth. “We handled business. It was not beautiful. We didn’t hit the ball as well as we could of and I was a little disappointed in that. We had one little boo-boo out there on defense, but other than that, Kaitlin (Hadaway) did a great job pitching. She struck out seven straight at one point. If you pitch as well as that you can win easily if you score a few runs. I am excited about Gulf Shores.:
As for the win over T.R. Miller, Haney and his coaching staff and players could not contain their excitement.
“I am excited for this bunch of girls,” Haney said. “They have worked hard. They made it a little closer than I wanted it to be though. A win is a win and we will take. We have two seniors in Kena Ellison and Kaitlin Hadaway. They have done a great job all year of leading us towards this. This was our goal from the get go to be area champs and go to the playoffs and we made that happen. I am excited for them. We still have some work to do if we are going to keep playing. I have some work to do and they have some work to do. We are going to have to get to work with the bats and get everything going. I am just super thrilled and proud of all the girls today. It has been a long time coming.”
While his team came up on the short end of the stick as far as the area championship was concerned, T.R. Miller Lady Tiger head coach Greg White said he was proud for his team of getting the runner-up spot and punching their ticket to Gulf Shores.
“I thought that that was the way the game was supposed to be played,” White said. “Congrats to W.S. Neal. They played a good game. They got the hits when they needed it and they made the plays when they had too and we didn’t. I am proud of my kids though. They played hard and they played tough. Our goal today was to get to Gulf Shores and we did that. We would have liked to have won this one, but we have a chance to keep playing. A lot of teams did get that opportunity, but we have it now. We are going to go back to work and get ready for this next weekend.”
The Lady Tigers defeated Cottage Hill earlier in the day by a score of 9-0 to clinch their spot in the area championship game against W.S. Neal and clinch the spot to Gulf Shores. The win came two days after falling to Cottage Hill 9-2 on Tuesday in their opening game of the tournament.
“That was obviously a huge win,” White said. “We put ourselves in a bad position with a loss on Tuesday, but I felt like we played like we were capable of, we would have a chance to win. We hit the ball well and offense we were pretty solid. We had a pretty good defensive game. We had three or four plays that helped save a run or two, but we hit the ball well and I was proud of that. Laurel pitched pretty solid. To go to Gulf Shores is obviously a goal from day one. We accomplished that but still have some work to do.”
W.S. Neal improved to 15-12 overall with their two wins Thursday while T.R. Miller went to 14-13. The Lady Eagles and Lady Tigers will both play in Gulf Shores on Friday at 9:30 a.m. As area champion, W.S. Neal will meet area 2 runner-up Straughn while T.R. Miller will meet area 2 winner Opp. Opp improved to 34-6-1 Thursday with a 14-4 win over Straughn in their area championship game. Straughn fell to 19-18 overall.
With a win in their first round game Friday in Gulf Shores, W.S. Neal will meet the winner of Montgomery Catholic and Slocomb at 12:30 p.m. With a loss, W.S. Neal would meet the loser of that game at 12:30 p.m. With a win in round one, T.R. Miller would play the winner of Geneva and Pike County at 12:30 p.m. while a loss would match them with the loser of that game also at 12:30 p.m.
The tournament is double elimination with the top two teams advancing to the state tournament in Montgomery.

WSN 4, CH 1
In the winner’s bracket game Thursday to kick things off, W.S. Neal defeated the Lady Warriors 4-1.
Cottage Hill struck first with one run in the first inning, but the Lady Eagles responded with one run in the bottom of the inning, two in the fourth and one in the sixth to get the win.
Hadaway went the distance in the pitching circle and allowed one run on one hit, walked one, hit one and struck out 13.
At the plate, Ellison had a single and Hadaway added an RBI single. Haleigh Dubose had an RBI double in the fourth inning and Adria Barnett had a single in the fourth.

TRM 9, CH 0
After giving up an eight spot to Cottage Hill Tuesday in a 9-2 loss, T.R. Miller returned the favor Thursday with a six-run third inning to help eliminate Cottage Hill with a 9-0 win and move on the area championship game against W.S. Neal.
Laurel Billy went seven innings in the circle and allowed one hit, no runs, walked two and struck out three.
The Lady Tigers pounded out 13 hits in the win. Audrey Hamric had two singles while Abbi Roberts and Kelsey Thompson had a single each and Thompson had one RBI.
Jessica Allan had a single and two RBIs while Taylor Austin had a single. Moriah Brundidge added a double and a single and Leslie Holmes had three singles and double and three RBIs.
Ali Taylor had a triple and two RBIs.

WSN 4, TRM 3
Trailing T.R. Miller 1-0 after one inning, the Lady Eagles scored three in the top of the fourth and one run in the fifth to build a 4-1 lead and then hung on for a one-run win after the Lady Tigers scored two in the fifth inning.
Hadaway earned the pitching win for the Lady Eagle as she went seven innings and allowed five hits, three runs, walked two, hit one and struck out eight. Billy took the loss for T.R. Miller going seven innings and allowing seven hits, four runs, walked one and struck out three.
At the plate for the Lady Eagles, Ellison, Tori Wyatt, Kaeli Brown, KeKe Floyd and Madison Winchester all had singles while Hadaway had a single and a double. Hadaway, Karissa Johnson and Winchester all had one RBI each.
For the Lady Tigers, Allan, Austin and Holmes all had singles. Roberts had a triple and a double and one RBI.
T.R. Miller had a runner on third in the fifth called out for leaving early and had a runner in the first inning get out a third base on a sacrifice bunt.