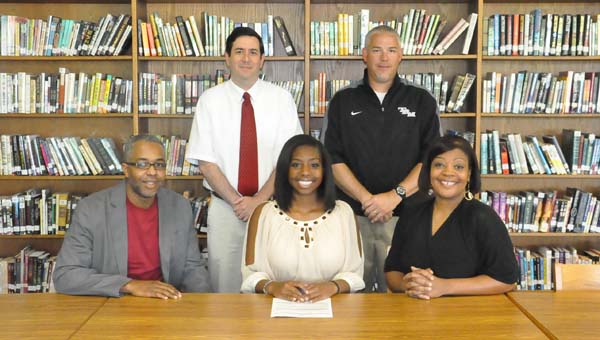 T.R. Miller senior volleyball player Lauren Bradley became a Jefferson Davis Community College Lady Warhawk volleyball player Wednesday morning as she inked a scholarship for new JDCC volleyball coach Allen Gainer.
“I am very, very excited,” Bradley said after signing the volleyball scholarship with JDCC. “Throughout my whole high school volleyball career I have been pushing towards to getting to play at the college level. This is a big step towards getting to play at a major college like Alabama or UAB or somewhere like that. I would like to start here at JDCC and go somewhere like that.”
Bradley said going to JDCC just felt “comfortable” for her.
“It was close to home and this scholarship gives me full tuition towards JDCC,” she said. “So, everything is covered. I didn’t have to stay on campus and it just feels comfortable to be able to go here at JDCC.”
Along with Gainer, Bradley was joined at her signing by her father Schwayn, mother Marilyn and T.R. Miller volleyball coach Greg White.
White said Bradley has been part of the T.R. Miller volleyball program for six years.
“She has been playing with us since middle school and she is that kid that has progressively gotten better every year,” he said. “She worked hard year after year and her senior year was probably her best year. She became a pretty good hitter and a blocker for us and this is a nice reward for her. This shows that if you keep working, good things will happen to you. This is a prime example of that so we are proud for her and wish her the best of luck.”
Gainer said he was excited to have Bradley join him at JDCC.
“When she came over and tried out for us, she just had an enormous amount of enthusiasm and excitement for our program and she did an outstanding job with the drills that we put her through,” Gainer said. “We think that she will really be able to add to our defensive abilities in particular. The Jeff Davis girls from this year were very excited about how she conducts herself and presents herself. We just think she is going to be a great addition to the school as well as for our program.”
T.R. Miller went 11-8 this year in volleyball while JDCC went 11-20 overall and 6-8 in conference play. Gainer, who also serves as the school’s basketball coach, took over the JDCC volleyball program recently after former JDCC volleyball and softball coach Misti Nims resigned the position.
JDCC is scheduled to start their 2013 season under Gainer in August.