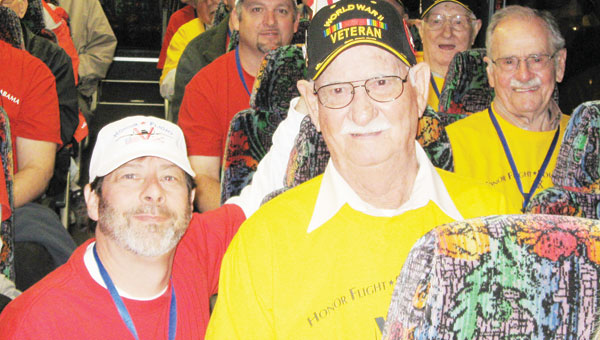 Caylop Minchew, right, is joined by guardian Timmy McLain as they travel to Washington, D.C. for a whirlwind tour.

Dozens of children’s letters — many on red, white and blue paper — were spread across the table in front of Caylop Minchew Friday as he continued to bask in the glow of being a part of an Honor Flight from Mobile.
The letters, written by students throughout Mobile County, were delivered to Honor Flight participants last week, just after they flew on the last flight of World War II veterans to Washington, D.C., Wednesday.
Minchew, who will celebrate his 87th birthday next month, said the trip taken earlier this week was an emotional and enjoyable journey.
The reception in Washington and at the Mobile airport was overwhelming, Minchew said, and the comments from many children were touching and gave him hope.
“There were a lot more people than just us visiting at the monuments,” Minchew said. “There were so many people that would come up to us and shake our hands to say thank you for what we had done. They recognized us from the shirts we had on. Even little children would come up to shake our hands and say thank you. One little kid said ‘thank you for sacrificing your life’ to me about serving. Some people called us heroes, but I just told them that I wasn’t a hero. The real heroes are the ones who didn’t come back.”
Minchew traveled with 100 other World War II veterans.
“Seeing the Tomb of the Unknown Soldier at Arlington Cemetery was the most emotional part for me,” he said.
Minchew was a member of the 11th Division Army Airborne team. Having served in the South Pacific/Philippine Islands, he made landfall in the area 68 years ago this month. “That was just a month after I graduated from parachute training at Ft. Benning, Ga.,” he said of the May 1945 arrival.
Minchew said he owed thanks to Dr. Barry Booth, who has coordinated the Honor Flights from South Alabama for several years.
“I had tried to get onto the September flight, but all the spaces were taken,” Minchew said. “I heard this flight was supposed to be the last one, and I was hoping to get on it. I was glad to be able to be a part of this flight.”
Minchew’s wife, Liz, said the family looked into the possibility after he expressed interest when others returned from the trip. “We just thank God that he has been given the health to be able to go on this flight,” she said.
Liz said seeing the outpouring of support as the veterans returned from the daylong tour of Washington was emotional for her, too.
“Just to see them thanking him for being a hero was awesome,” Liz said. “It was just a wonderful experience to see so many people there to welcome them.”
Minchew said he hoped to respond to each of the letters he received from the children.
“When I saw all those letters, I was amazed,” Minchew said. “The students must have picked out who to write to or they would have had to write 101 letters. I plan on answering everyone of them that I have an address to write back to.”
Minchew will have another opportunity to share his experiences of the Honor Flight event next week with the congregation at Ridge Road Baptist Church where he attends services.
“Every year our church group celebrates Memorial Day with an outing,” Minchew said. “I’ll be speaking and sharing this with them during that service.”
Officials with Honor Flight say Minchew’s flight could very well be the last one taken due to the increasing age and decreasing health of many World War II veterans.
Since the first flight of its kind in 2009, Mobile’s Honor Flight has transported 950 veterans to Washington, D.C., for a one-day, whirlwind tour of the nation’s capital.
“It was great to be a part of it all,” Minchew said. “God has been good to me.”