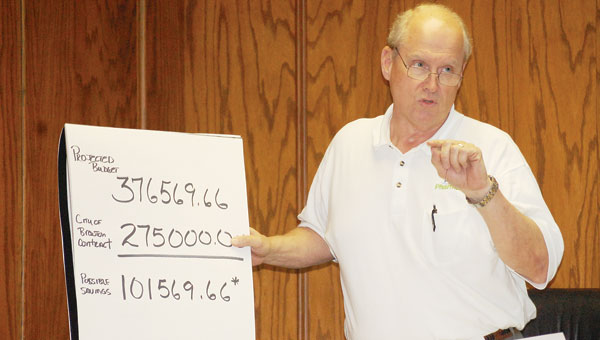 Flipping through a homemade chart, East Brewton Councilman Ned Sibert on Monday told residents that, for him, the decision on whether to have Brewton take over police services in the smaller city comes down to “dollars and cents.”
Brewton officials have told East Brewton that Brewton could cover police services for a contracted amount $275,000 per year, Sibert said.
According to Sibert’s figures, contracting with the City of Brewton would save East Brewton $101,000 per year. Mayor Terry Clark, however, said he thinks the savings would be about $50,000 to $60,000 a year.
Sibert’s math, according to what he showed residents Monday, figures in the additional cost of night and weekend dispatchers, who were added to an already tight police budget in December after Brewton declined to continue dispatching for East Brewton during those times.
“Right now we have a $232,000 budget for our police department,” Sibert said. “The amended budget is at $288,000. As of March we were at 50 percent of our budget, with $6,000 over budget for overtime pay.
“We lost our dispatching service on the weekends and had to add dispatchers to the staff,” Sibert said. “That adds another $44,000 to our budget. When you look at the additional insurance, workers comp and other expenses, that puts our budget at $376,000.”
So far this year, East Brewton is about on target with its police department salary expenses — but the city has spent much of the year with only two or three of its budgeted five officers, and has paid for dispatchers for five months. If the staff stays full until the end of the fiscal year, the salaries will be over budget.
Siebert said the contract amount proposed by Brewton officials would be a financial savings for East Brewton.
“Brewton has said they could provide service for us for $275,000 a year,” Siebert said. “That would give us a $101,000 savings every year with that contract.”
Those attending Monday’s meeting of the East Brewton council said the plan may be a financial savings, but voiced concerns over the quality of protection to be provided by Brewton officers.
“They have promised us two officers in two zones with a supervisor on duty for backup,” Siebert said. “We will have access to their narcotics unit, investigators, critical response team, everything they have. I would love for us to have fully-equipped services for this city. It all comes down to dollars and cents where it involves officers.”
Although Sibert shared figures that showed a savings of more than $100,000 for police protection for East Brewton, Clark said he believes the savings were exaggerated based on his own figures.
“I figured a savings of more like $50,000 or $60,000 for the city,” Clark said. “I really think we could handle that amount.”
Clark praised the current police staff in East Brewton for work being done in the city.
“If you come here to city court, you’ll see the evidence that they are working hard in this city,” Clark said. “The courtroom will be full where they’ve been out working and doing their job.”
Although finances play a big role in whether or not East Brewton’s council members move forward with a contract for services with Brewton, Clark said the opinion of the city’s residents will be considered.
“I think a couple of council members have made up their mind,” Clark said. “I think it will come to a vote. We wanted to hear from the public and we have. All of that will be considered.”
Clark said he expects the council to discuss the issue in a workshop meeting before the next council meeting, which will be held June 10. The council will not meet on May 27, which is Memorial Day.