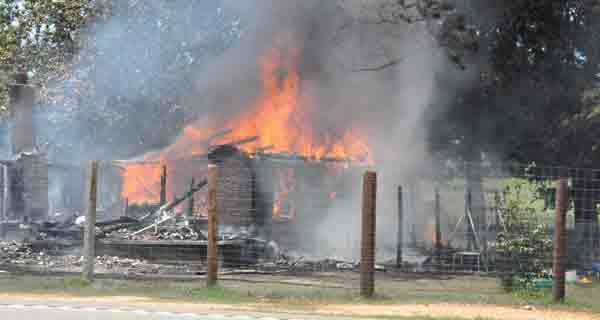 Smoke alerted two residents and allowed them to escape a house fire on U.S. 31 North Wednesday morning — but some chickens and rabbits on the property were not so lucky, firefighters said.

“Upon arriving at our station, which was a good distance from where the fire was,” Appleton Fire Chief Mike Tyler said, “we could see thick black smoke in the sky, and that usually means something bad.”

Tyler said he sent two vehicles to the fire with a crew of eight.

“When we got to the scene, the structure was fully involved,” Tyler said. “There was no chance that we could make entry. In the first minutes, we realized no one was in the house, which is always a good sign.”

Tyler said he usually carries around 1,000 gallons of water in his trucks, but Wednesday’s fire caused for several trips by his crew.

“We dumped all our water from our trucks in the first two to three minutes,” Tyler said. “We then left to get more water. At this time, we had others coming. We then got our second load and dumped it. Upon leaving to get our third load, we got assistance from Castleberry and Brewton. There were 15 firefighters on scene. We ended up having to go back Wednesday night to put out a few hot spots. We ended up putting an estimated 23,000 gallons of water on the fire.”

Tyler said as of Thursday the cause of the fire was unknown.

“After doing some interviews on the scene, we have determined it started in the attic,” Tyler said. “We also learned two people were inside when it started, but they were alerted by smoke and got out. There were a few animals like chickens and rabbits that were close by in cages that didn’t make it though.”

Tyler said he and Appleton Volunteer Fire Department thank all those who helped them fight the blaze.

“We are very grateful to Brewton’s two trucks and four firemen and to Castleberry,” Tyler said. “They made a difference in helping control the fire and not letting it get out of control. There was a resale place next door to where the fire was and if it had spread there, it would have been bad.”