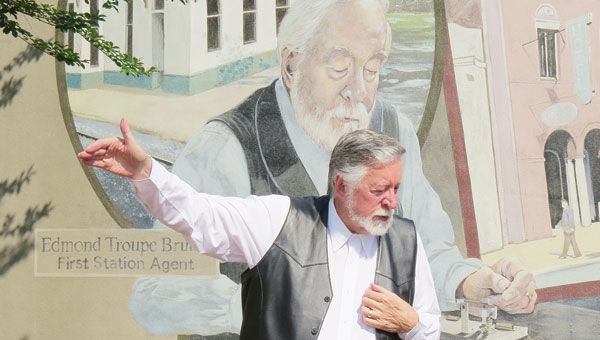 The downtown park — and mural — came alive Thursday for a group of Brewton students as Leon Brewton recalled the naming and growth of the city.
The outing for students from Brewton Elementary School was part of the 21st Century Community Learning Center program held after school hours, a program overseen by Hope Place.
The Brewton City School program is funded through a grant by the Alabama State Department of Education for both elementary and middle school students. Traci Hughes serves as director for both the elementary and middle school programs.
The program is an opportunity for students to learn more about the community in which they live and the best ways to be a strong part of that community, Hope Place Director Vicki Fussell said.
“Thursday’s lesson was just part of a service learning project for the program,” Fussell said. “It’s a project that allows students the opportunity to understand what I takes to live in a community as strong as ours and how a part of history contributes to our strength.”
Brewton, a descendent of the family for which the city was named, recalled the birth of Brewton and how the city name was conceived.
“The city was named for Edmond Troupe Bruton, one of my ancestors, who was a railroad agent,” Brewton told the students. “The spelling was different then and somewhere along the way it was misspelled. The family basically began using the new spelling from Bruton to Brewton. That’s how the city here was named Brewton.”
Brewton’s lesson for the children was more than just a glimpse at the history of the town, Fussell said it gave them a new way to look at a learning opportunity.
As the program winds down for the after school segment of the project, Fussell said the lessons the children have learned will be beneficial for the community in the future.
“We have helped them know how they connect to a community,” Fussell said. “If not for the children, we won’t grow. We all need to reach out at every opportunity to connect ourselves and our children to this wonderful community we call home.”

Cross case on hold for evaluation