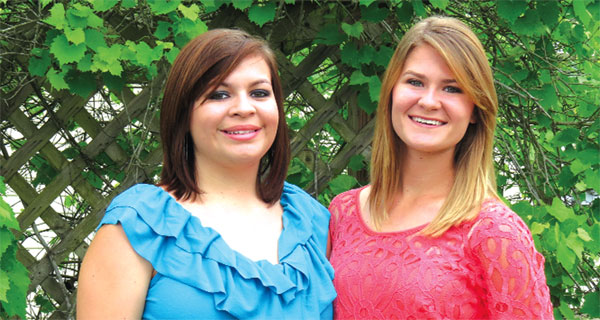 Gracee Dixon and Kaitlyn Hadaway are taking their place of honor in stride as the top two graduating seniors at W.S. Neal High School.
Dixon will be delivering the valedictory address Friday evening in East Brewton when graduation ceremonies are held. Her address will be followed by the salutatory address to be delivered by Hadaway.
For Dixon, the race to the top of her class has been one that she has strived for throughout her high school career.
“My parents have always pushed me to do my best, but I pushed myself even harder,” Dixon said. “School has never been terribly hard for me. I’ve always had straight As. A B would always upset me. I’ve just always been hard on myself.”
That push and drive for Dixon has been the force that has put her in a position that will thrust her toward her goals.
“There comes a point when you have to realize what your goals and dreams are in life,” Dixon said. “That’s when you have to have that desire to obtain those dreams. It takes determination.”
For Hadaway the race she has been running for four years has paid off and put her in the second most coveted spot in the senior class.
“I’ve worked hard to be the best that I could be,” Hadaway said. “That’s always what my parents wanted for me, too. I’ve worked hard and taken care of what I needed to do to get ahead.”
Hadaway said the grades she has earned throughout high school have been just that — earned.
“I have worked hard and studied hard,” Hadaway said. “I realized that to stay ahead you have to keep studying hard when others slack off. That isn’t the time to give up or give in. I’ve been able to do well. I’ve only had one B.”
Having a favorite subject in school has been a benefit for both Dixon and Hadaway — subjects each plans to work into the future careers.
“Math is certainly my favorite subject,” Dixon said. “I love math and really want to be a math teacher. I’ve had a few good math teachers that have inspired me. Mr. Pedro here at Neal and Coach Gainer at JD have both really inspired me.”
For Hadaway, history has been the subject that has given her joy through her high school years.
“I love history,” Hadaway said. “It’s my favorite subject. The thing that interests me is that we can learn from it and not make the same mistakes others have made before us.”
Dixon plans to attend the University of Alabama on scholarships and hopes her past educational opportunities will be beneficial.
“I have gotten some local scholarships and two Alabama Alumni scholarships that will help,” Dixon said. “I have been in the dual enrollment program through Jefferson Davis Community College and I hope that will help with some of my basics. I plan on being in Tuscaloosa this fall.”
Although Dixon’s plans include being a math teacher, political science is also a career choice option, she said.
“My advice to other students is to never quit,” Dixon said. “You may think you can’t do something, but you can always surprise yourself. Dream big.”
Dixon has been a member of the scholar’s bowl team for three years serving as captain during her junior and senior year of school. She has also been on the school’s volleyball team for four yeas and math team for two years. She has been a member of the National Honor Society for two years.
Hadaway said she hasn’t fully decided on a career but said it would probably involve sports therapy.
“I will be attending Jefferson Davis Community College on a softball scholarship,” Hadaway said. “I am looking at attending Auburn University after that. I’m really looking more at physical therapy for sports injuries as a career. Orthodontics is also interesting to me.”
Hadaway advises other students to pay attention to every day of life as they enter their senior year of school.
“Enjoy every moment you can,” Hadaway said. “It goes by really quickly.”