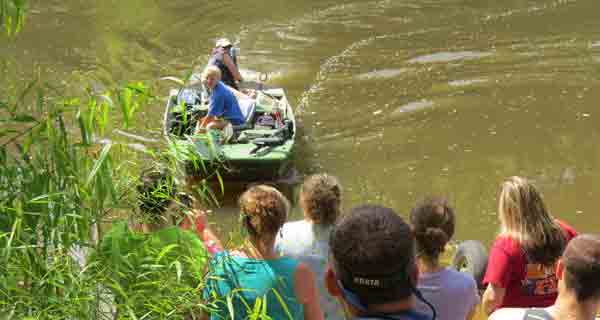 Paige Grantham is delivered to shore Wednesday morning by search/rescue team member Andy Bethea. Grantham was the first of five teens rescued after their boat capsized on the Conecuh River overnight Tuesday.

Five teens — four of them seniors at W.S. Neal High School — were found hovering on a sand bar along the Conecuh River Wednesday morning by rescuers and emergency responders.

Escambia County Sheriff Chief Deputy Mike Lambert said the call for assistance in searching for the five missing teens came in just before 9 a.m. Wednesday morning. A search team — including tracking dogs from Fountain Correctional Facility — were called in to assist in the search.

“We had the department’s plane in the air and that’s how the group was spotted,” Lambert said. “We’re just thankful we found them and they were found safe.”

The five teenagers, Paige Grantham, Cord Moulder, Keaton Ward, Johnathan Braddock and Brian Settle, had to abandon their boat during the night Tuesday when it capsized along the river, officials said.

“Graduation ceremonies at W.S. Neal could have been pretty bad Friday night,” Lambert said. “Thankfully, with the coordinated efforts of all our personnel and from other agencies, we got a happy ending.”

For more of the story on the search and rescue, see the weekend edition of The Brewton Standard.