‘A dream of mine’: WSN’s Williams goes to FSCC on a baseball scholarship 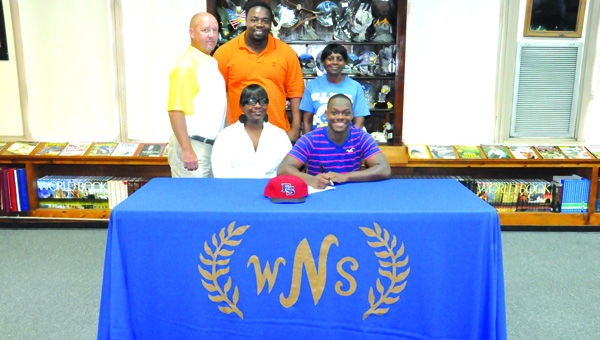 W.S. Neal senior baseball player Damion Williams will go from playing his high school ball for a team that was ranked No. 1 to playing his college baseball for another No. 1 team. That is the case after Williams signed a scholarship Thursday afternoon to play with the Faulkner State Community College Sun Chiefs.
Williams and the W.S. Neal Eagles were ranked No. 1 for the whole 2013 and the Sun Chiefs of Faulkner State were ranked No. 1 as well in 2013.
“It means a lot to me to sign this scholarship,” Williams said Thursday in the school’s library. “It has been a dream of mine to sign a scholarship somewhere and go to college and play. Mainly it was a goal of mine. A short term goal but now it is a long term goal. It means a lot to me and my family. My family has had high hopes and high expectations for me. I just want to do everything right for them and sign this scholarship and do good in college.”
Williams said several factors led him to sign with the Bay Minette school.
“It was beautiful up there,” Williams said. “They had a real good baseball team that coach was telling me about. They were ranked No. 1 before they went to the tournament and I like that. I like going to a good team and getting seen by bigger colleges and schools. That is my dream to play in the pros. I think the Arizona Diamondbacks were looking at me because they said I was a nice baseball player. I want to sign a college scholarship to play with a coach that knows pro scouts. I hope to be a good baseball player at Faulkner and I hope to get better. I want to succeed in my dreams and play in the pros and just get better.”
Joining Williams at the signing was W.S. Neal head coach Coy Campbell, Faulkner State head coach Wayne Larker, William’s mom Pamela Williams, step dad Calvin Gaines and grandmother Diane Williams.
W.S. Neal head coach Campbell said Williams had been with the Eagles since the eighth grade.
“He is a hard worker and a competitor,” Campbell said. “He has helped us out a lot over the last four or five years. He is a big reason, along with some other guys, for the success we have had over the years. He is going to be surely missed, but at the same time it is our job as coaches to give these kids an opportunity to move on to the next level. He is getting that opportunity and hopefully he will take advantage of that opportunity and make us proud here at W.S. Neal.”
According to the Faulkner State baseball Website, Faulkner State head coach Larker is now in his 29th year at the school and 28th year as head coach. His teams have posted an overall record of 832 wins and 596 losses with an outstanding winning percentage. The Chiefs under his reign have participated in post season play 22 times in 27 seasons. In those years, they have won six league championships and five state tournaments. Over the years, the majority of his players have gone on to play at four year schools and many are currently coaching at high schools, colleges, or the professional ranks. Larken has had 49 players advance to professional ball.
Coach Larker began his college education and playing career at Long Beach Community College before moving to the University of South Alabama. There he earned a B.S. Degree in Education and Masters Degree in Exercise Physiology, while playing first base and pitching for the Jaguars. He then furthered his playing career by signing a professional contract with the California Angels in 1981.
At Faulkner State, Coach Larker also instructs Physical Education classes, and is the Fitness Coordinator for the college. In January 2008 Coach Larker was inducted into the Alabama Baseball Coaches Hall of Fame.
Larken said he liked what he saw in Williams and that was the reason he offered him a scholarship.
“When you go and see guys, you are really looking for athleticism because you do not see them everyday,” Larken said. “I know coach Campbell does a good job with them and he recommends him highly, but when I saw him, he pretty good bat speed and pretty much hit the ball on the button every time. A sign of a good hitter is to hit it on the button three or four times no matter if you get a hit or not. He hit the ball pretty good and he has a lot of good reports coming from some professional scouts and some four year schools told me he was a pretty good athlete and that is what I saw.”
Williams helped lead W.S. Neal to a 30-2 record this past year. The Eagles, who were ranked No. 1 all season, started the year 30-0 before falling in games two and three to eventual two-time state champion Trinity in the class 3A state semifinals.
Williams is the second Eagle to sign a baseball scholarship this year as Brian Settle signed before the 2013 season started to play at Alabama Southern in Monroeville next year.