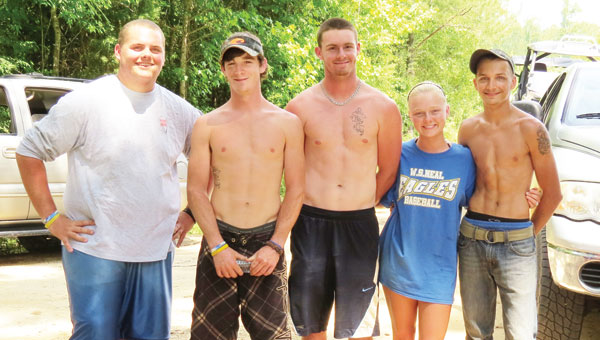 Five teenagers set out Tuesday for a fishing trip on the Conecuh River that turned into a rescue expedition.
Forced to abandon their sunken boat near the Parker Bridge area of the river Tuesday night, the teens found ways to get as comfortable as possible to wait out the darkness in hopes of being rescued.
Paige Grantham, Cord Moulder, Keaton Ward, Johnathon Braddock and Brian Settle — all W.S. Neal graduates from this year and last year — had set out on their trip Tuesday afternoon.
But their boat overturned in the river, leaving them to find refuge on a sand bar — but with few provisions, no cell phone service, and, for one, even no shoes.
“We used my shirt to make some shoes,” Moulder said. “We just cut it up to wrap around their feet so they could walk.”
Although the group did try to walk out of the woods that surrounded the river, the thick brush and darkness of the night prevented them from making any progress in their journey.
Grantham said the decision to return to the sandbar and wait for help was a group decision. As they settled in for the night, Grantham said the guys helped make the night a little less scary for her.
“They made us a couch out of the sand,” Grantham said. “We were able to get some sleep by digging holes so we could get in and sleep.”
Ward said the night was chilly and the group made a fire by using what his friends called “MacGyver” techniques.
“We had the battery from the boat and a Q-beam light,” Ward said. “I used the battery and some of the Q-beam wire and arced with a little gasoline, I was able to get a fire started. It helps when you’ve got woods smarts.”
Braddock said although the evening was spent in unfamiliar territory, they were never really afraid.
“Of course, we were concerned a little bit,” Braddock said. “But, by morning, we were enjoying it a little bit.”
When the teenagers didn’t return home, their worried parents reported them missing. The Escambia County Sheriff’s Department began searching along the river after 8:30 Wednesday morning. Deputies and volunteers joined the hunt, with sheriff’s officials even taking to the skies to try to spot the group.
Andy Bethea and Jessica McDonald were among those volunteers who took rides back and forth by boat along the river looking for any sign of the group when Bethea said he spotted the teenagers.
“They were standing there cheering and clapping when they saw me coming to them,” Bethea said. “They had a little campfire right there on that small, little sandbar where they’d been all night. It was a good sight to see them all there and OK.”
Parents and family members were gathered on the riverbank waiting for the group when they arrived, cheering for them and ready to give hugs. The teenagers had only minor injuries from their unexpected stay on the sandbar overnight.
“I am so happy things turned out the way they did in this situation,” Escambia County Chief Deputy Mike Lambert said. “This could have been a very sad graduation at W.S. Neal if we hadn’t seen this outcome.”
Lambert expressed thanks to those who boarded boats, four-wheelers and other vehicles to help in the search for the teens Wednesday morning.
“With the coordinated efforts of all the agencies that assisted in this search, we were able to find these children and get them back home,” Lambert said.
Agencies involved in the search included members of the Escambia County Sheriff’s Department, Escambia County Rescue Squad, Alabama Wildlife and Fisheries personnel, and the Fountain Correctional Facility dog team members.
As for the parents who were so worried, they were all too happy to see their children pose for a photo together — “for their scrapbook,” one parent said.