BLAST swim coach Boyd proud of all her swimmers 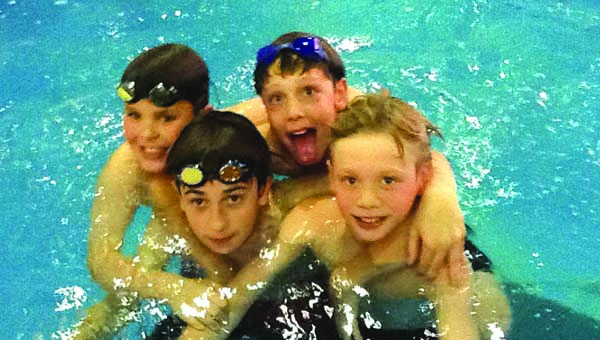 The Brewton Local Area Swim Team has started the long course season with a bang as the Tigersharks just received recognition by USA Swimming as a Silver Level Swim Club. Also, after developing National Level athletes this past Short Course Season, the club has jumped right into the Long Course Season without slowing down in the awards department.
Coach Angel Boyd stated that the Tigersharks are two meets deep into the Long Course season and already have swimmers qualified for the Southeastern Swimming Meet of Champions, which will be held in Nashville this July.
The Tigersharks traveled to Birmingham at the end of April for the HBT Vulcan Classic and most recently went to Pensacola, May 11-12 for the GPAC Log Course Spring Fling.
Colby Morris, son of Brandee Morris, achieved six cuts as a 12-year-old in the recent meets.
“Colby has been cutting the 50, 100 and 200-meter freestyle events along with the 50 and 100-meter Backstroke and the 50-meter Breaststroke,” Boyd said. “Colby has worked hard this season to produce cuts these events and is expected to do well at Southeasterns in July. Mac Baxter, son of Chris and Angel Baxter, age 10, recently achieved cuts in every event he swam at the GPAC Spring Fling in Pensacola. Mac has cuts in the 200-meter Individual Medley, the 50 and 100-meter Fly events. Mac has worked hard, and that hard work has paid off in a big way. Mac is a well-rounded swimmer who seems to excel in the breast and butterfly events.”
Nolan Atkinson, son of Rob and Lisa Atkinson, age 9, is a National Level-Short Course swimmer and has also swept his events at the Spring Fling.
“Nolan has achieved Southeastern Long Course Cuts in every event he swam,” Boyd said. “Nolan cut the 50, 100, and 200-freestyle, the 50 and 100-Backstroke, the 50 and 100-Breaststroke as well as the 50-meterFly. Nolan is a young 9-year-old competing in the 9-10 age group and has achieved three individual zone cuts and placed third overall in points at this meet. Nolan is a driven athlete, who is one of the fastest freestyler age-group swimmers in the country. Nolan is swimming the 50-meter freestyle with speeds a really good 11-12 swimmer and is expected to produce.”
Cole Jernigan, son of Lee and Felicia Jernigan, age 11, is a recent National Level swimmer in Short Course as a 10-year-old.
“He had an amazing first meet of his 11-12 age-group swimming career,” Boyd said. “Only swimming one day in a cut throat 11-12 boys age group, as a recently aged up 11-year-old, Cole achieved Southeastern Long Course Cuts in the 100-meter backstroke and the 100-meter freestyle events and came within a couple of milliseconds in the 50-meter breaststroke. Cole, who is a pure backstroker, is an accomplished swimmer with great speed, stroke control and a winning attitude every time he enters the water. Cole is expected to achieve several more cuts for Long Course Southeasterns before we head to Nashville in July. Cole will also be attending the Auburn University Swim Camp in early June.”
Boyd also noted that Walker Volonte, son of Roberto and Cristina Volonte, age 8, has also had a great Long Course Season so far.
“Walker, a young 8-year-old competing in the 10U boys division and has achieved a Southeastern Cut in the 50-meter Breaststroke and is on target to achieve the 100-Breast cut as well,” Boyd said. “Walker is a focused young man with one of the purest breaststrokes I have seen in such a young swimmer. Although quiet and laid back most of the time, Walker is a real Tiger when he swims.”
Sara Scott, daughter of Doug and Sheila Scott, was also noted by Boyd.
“Sara is another speedy 9-10 Breaststroker,” she said. “At the recent spring fling Sara, who only swam one day of the two-day competition, racked up a 50-meter Breaststroke cut for Southeasterns in Nashville. Sara is another pure stroke swimmer, who excels in the Breaststroke. Sara is poised to pick up another Breast cut before July, in the 100-meter Breast event.”
Other Tigersharks that are on their way to a Southeastern cut for Long Course are:
Elizabeth Glass, daughter of Dewayne and Brooke Glass, and Jocelyn Carpenter, daughter of Brant and Carla Carpenter.
“Elizabeth is within a few milliseconds of a cut in the 50-meter freestyle and a second off the 11-12 girls 100-freestyle cut as well,” Boyd said. “Elizabeth is a young 11-year-old swimming in a cut throat 11-12 girls age group, and she is definitely holding her on. Elizabeth should join her other teammates with SE Cuts for Nashville by July. Jocelyn also attended the Spring Fling as a 9-10 girl, dropping times in every event she swam and coming within one to two seconds of several cuts for Nashville in July as well.”
Other stand out Tigersharks who competed in the GPAC Spring Fling are: Caleb Kent, son of Danny and Phyllis Kent; Callie Kent, daughter of Danny any Phyllis Kent; Riley Surles, son of Mark Surles and Stacey Fuqua; and Joseph Carpenter, son of Brant and Carla Carpenter.
“All of our Tigersharks swam great,” Boyd said. “We are very proud of their hard work and dedication. The smiles on their faces are what matters most to me. Of course it is great when they win wards and make cuts, but more than anything, the look on their faces after swimming a race as hard as they can, makes me the proudest of all.”
The Tigersharks are led by Boyd and coach Brandee Morris. Also in training for her coach’s credentials, Brooke Glass, will be joining their coaching ranks soon.
The Tigersharks are now registering for the Summer Season for both recreational and USA club level team. Summer session kicks off Monday, June 3.
For more information, contact Boyd (334) 303-1171 or Morris (251) 236-0357. Also, check the team out on Facebook at Brewton Local Area Swim Team.

AU Alumni club to meet in Atmore on June…