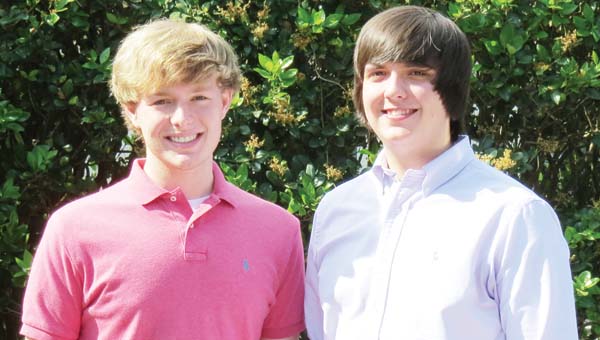 Close. That single word is the best way to describe the valedictorian and salutatorian for the 2013 graduating class at T.R. Miller High School.

Valedictorian John West and Salutatorian Wes Maddox have known each other since their days at St. Stephen’s Preschool and their grade point averages — which were used to determine their placement in their senior class – for their high school years was only separated by one-tenth of a point

“We kind of knew each other, but we weren’t ever friends,” West said. “But, in the last couple of years, we’ve become really good friends.”

The two have become such good friends that they plan to spend time together as they begin their college career.

“We’ll be rooming together at the University of Alabama,” Maddox said. “We’re just that close and it just makes sense.”

Both of T.R. Miller’s top seniors will be heading to Tuscaloosa this fall pursuing an education to help them achieve their dream careers.

West is planning a future that will have him involved in the medical field.

West’s mother and an aunt are both nurses — a fact he says had a little influence on his decision.

With science and English as his favorite subject while in school, West was able to achieve a 4.45 grade point average and land a score of 34 on the ACT.

“For those coming into their senior year, I would advise them to enjoy it,” West said. “That senior year will be the last year you have together with your classmates.”

Maddox has a few more decisions to make in his path toward a career, but has already made a stop toward engineering as a profession.

Maddox, who earned a 4.35 grade point average and earned a score of 33 on the ACT, will likely continue with some of the interests he enjoyed during his time at T.R. Miller High School.

Maddox was a part of the Scholar’s Bowl team, math team, a band and choir member, a member of the Pep Club, acted in the senior play and worked with the Relay for Life team.

“My best advice for other students is to try not to procrastinate,” Maddox said. “It can really get you if you do.”

City gets option on land near airport