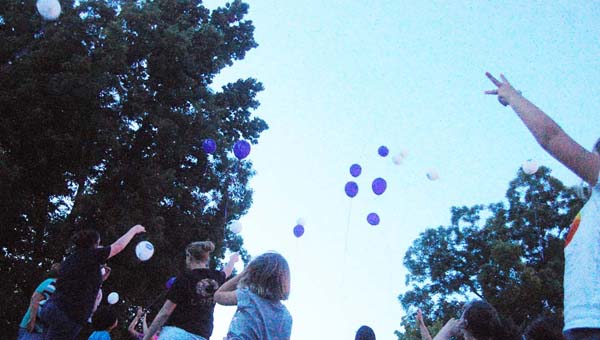 Supporters of the American Cancer Society let loose dozens of balloons into the sky Thursday night, in celebration of the ACS’ 100th birthday.

The event also saw the lighting of luminaries along a short path in Burnt Corn Creek Park, in memory and honor of those who have fought cancer.

“We are here tonight to celebrate the American Cancer Society’s 100th birthday,” said community ACS representative Chris Brown. “We celebrate this milestone as the official sponsor of birthdays, but we still have a long way to go. Two of three people now survive cancer, but we won’t stop until it is 100 percent. Let’s make sure this is cancer’s last century.”

While the original plan was to release lighted sky lanterns, strong winds forced the group to turn to helium balloons instead.

The event was organized largely by Gulf Winds Federal Credit Union. Jessica Klenk of Gulf Winds said the organizers hope to bring the event back next year. “We’re going to make it bigger and better,” she said.