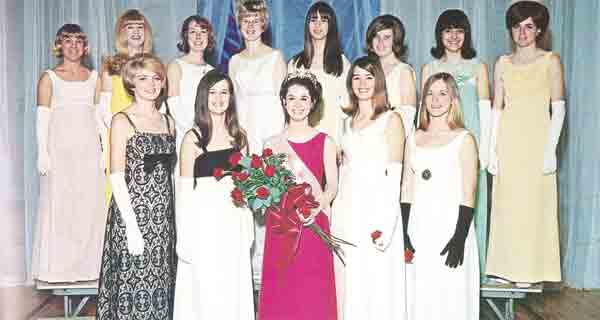 Contestants for the title of Miss Beauvoir 1974 at Jefferson Davis Junior College pose for a yearbook photo. These students, and countless others, are being invited to be a part of the JDCC Alumni Association.

Attending Jefferson Davis Community College — at any time in history, for any length of time — has put many area residents in a position to be a part of a newly formed JDCC Alumni Association.
Jennifer Pollitte, a graduate of JDCC — and now an employee — is working with a six-member committee to help the association grow.
“We started working on a project to put together a special homecoming event for 2015,” Pollitte said. “That will be JDs 50th anniversary and we wanted to have a big homecoming. We started thinking it would be nice to have all the alumni on campus for that celebration and the idea to start an alumni association just made sense.”
Pollitte said the committee members are working on the project using any means of communication with former students available.
“We’re already using social media to get the word out,” Pollitte said. “We are doing everything we can think of to let the former students know that we want them to be a part of this association.”
Although the group is still in its infancy, Pollitte said it is beginning to grow.
“We really want to get enough people to join in so that we can begin to elect officers for the group,” Pollitte said. “There is no limit to the number of members that can join. We want this to be as big as it can be.”
Committee members are already working on by-laws for the group and setting goals for events in the future. Those serving on the committee with Pollitte are Anita McCreary, Dr. Marilyn Nicholson, Misty Nims, Keith Lisenby and Jamia Presley.
“Our goal is to have a really good attendance at our homecoming,” Pollitte said. “We are hoping that by having a good attendance, we can revive that homecoming tradition on the campus. There used to be homecoming events in the past and it looked like a lot of fun. We want to have that on our campus again.”
Some students may wonder if they qualify for membership in the JDCC Alumni Association, but Pollitte said the criteria for membership is pretty liberal.
“A person didn’t necessarily have to graduate from Jefferson Davis in order to be a member of the alumni group,” Pollitte said. “If they attended JD at all, even for just one or two classes, they qualify.”
Not only are former students of Jefferson Davis Community College invited to be a part of the group, the membership arm reaches out to other students as well.
“Anyone who attended classes at Jefferson Davis Junior College, Atmore State Technical College or Jefferson Davis Community College can be a part of this group,” Pollitte said. “We are all under one umbrella now and we are all part of the same family.”
To keep in contact with our alumni – anybody that joins is free.
Pollitte said there is no fee to join the group and membership is now open.
To find out more about the JDCC Alumni Association and how to join, visit the college website at www.jdcc.edu/alumi; visit the alumni Facebook page at wwww.facebook/jeffdavisccalumni or call Jennifer Pollitte at 809-1520.