A Flomaton woman is being held at the Escambia County Detention Center in Brewton after 21st Judicial Drug Task Force officers arrested her on a traffic stop Tuesday.

Elizabeth Nichols, 23, of College Street in Flomaton, was the driver of a pickup truck seen speeding by DTF officers along a stretch of Foshee Road when a traffic stop was initiated. 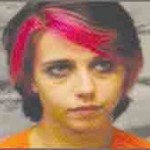 DTF Lt. Adam Johnson approached the vehicle after it came to a stop near the intersection of Alabama 113 and Foshee Road. Johnson was able to identify Nichols as the driver.

During the traffic stop, a K9 officer alerted on the vehicle and a search

was conducted at that time.

Officials said the search revealed the presence of a

controlled substance and lead to the arrest of Nichols.

Nichols had been free on bond after an arrest on other charges. Tuesday’s arrest prompted officials to file a petition to revoke that bond. She remained behind bars at the Escambia County Detention Center as of Wednesday afternoon, officials said.