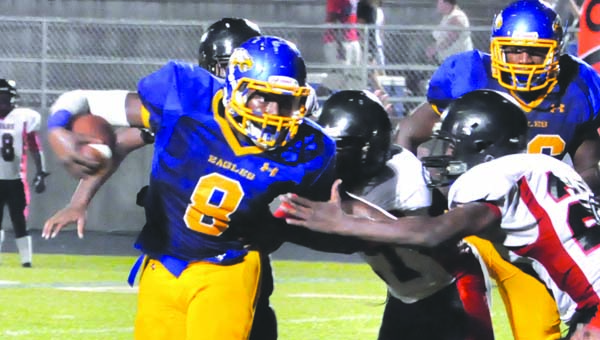 After quitting two games into his sophomore year, W.S. Neal Eagle running back Marquese Banks then rushed for 1,400 yards in his junior season and 2,000 yards his senior year—and now he is going to college and getting his education for free.
That is the case recently as Banks has signed a football scholarship to play for the Eastern Arizona College Gila Monsters in Thatcher, Ariz.
“It feels pretty good,” Banks sign to continue his football career after high school. “By me being the eldest of all my siblings, I am the first one to be able to go to college off a scholarship. I want to thank Mr. Todd (Williamson) and Mrs. (Patty) Frazier for staying on me. Also, with coach (Doug) Hoehn, I have had a good turnaround after I met him both in school and out of school. It was a pretty good little trip away from the house. It was not just around the corner. I had never been to Arizona before, but I look forward to playing running back there. I just want to get there and graduate from college there and hopefully go to a bigger college.”
Banks was named as the Alabama Sports Writers Association’s All-State honorable mention running back for class 3A in 2012.
Banks rushed for 236 attempts and amassed 2,059 yards for an average of 8.7 yards per carry and scored 22 touchdowns to help lead the Eagles to a 9-3 record during the 2012 campaign. Banks and the Eagles made it to the second round of the playoffs before losing to eventual state runner-up Fayette County.
As a junior last season, Banks rushed for 1,401 yards on 195 carries for an average of 7.2 yards per carry and scored 12 touchdowns.
W.S. Neal head coach Doug Hoehn, who saw his Eagles turn a 1-9 record from the 2011 season into nine wins in 2012 and saw the Eagles finish the season with 5,088 yards rushing and 56 rushing touchdowns, said he tells his running backs to not let the first guy tackle them.
“If you can’t make them miss we tell them that they have to run through them,” he said. “Ninety percent of the time, Marquese would do just that and just run right through them. We are proud of what he has done. We really are. He has come a long ways.”
Banks was the first W.S. Neal player since Ashton Elliott in 2010 to make the all-state list in 2012. Elliott made the team as honorable mention wide receiver. Banks was the lone player from W.S. Neal and T.R. Miller to make the team this past season.
Banks is the third player from the 2012 team to sign a scholarship to play at the next level. Josiah Nettles and Bryson Peterson signed earlier in the year to go to play college at Stillman.
Banks is Hoehn’s third signee from W.S. Neal and is the 63rd player to sign scholarships under Hoehn from 13 years as head coach to 35 different schools.
“Marquese is one of those kids when you talk about hard work and making a decision in life that you are going to be committed to something and you are going to work hard,” he said. “He is an example of that if you are going to work hard, good things are going to come. He has worked extremely hard to catch up in high school. He was a little behind when he got here, but he has worked hard to catch up. He has passed all of his state tests and has improved his grade point average. He has been in after school tutoring and our review program that we have here for the entire two years that I have been here. He has done the same thing athletically.”
Hoehn said Banks’ winter workouts, fall workouts and summer workouts have all paid off.
“He rushed for over 2,000 yards this year and over 1,400 last year,” he said. “This comes from a kid that, I know when I watched the films from the year before, you didn’t see him. He made a dramatic turnaround from being a kid that was just out there for football to a kid that is being committed and doing the best he possibly could with the hope that something good is going to happen if he does that. He believed in it and it happened. I am extremely proud of him. He has come a long way. He has come a long way in two years.
He was not on the team when I got here and he quit after two games his sophomore year. There has been a complete turnaround in his attitude. It can’t get any better than that.”
W.S. Neal will also have two walk-ons going to the University of West Alabama. Austin Dixon will go to West Alabama as a long snapper and Keith Bradley will go as a punter. “We have another one who qualified late and that In Tavin Ingraham,” Hoehn said. “Several schools are interested in Tavin. We don’t know what he is going to do, but several schools are interested. It all depends if there is enough money and something opens up. We hope he ends up going somewhere. He is a good football player and a good kid.”
The Brewton Standard will have comments from Dixon and Bradley in a later edition. If Ingraham signs with a school, the Brewton Standard will have comments from him as well.
W.S. Neal baseball Eagle Dylan Godwin has been chosen as a walk-on to play baseball at Faulkner State College. See a later edition of the Brewton Standard for a story on Godwin as well.