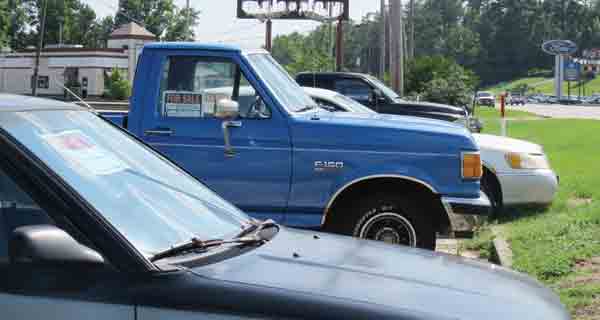 As many as a dozen vehicles have been parked in parking lots around the city on any given day — all up for sale by the owners. City officials are looking ways to curb the make-shift lots popping up for that purpose.

When city officials began to consider ways to clean up unauthorized car lots around Brewton, community development director Steve Yuhasz said he took a drive around town to make an informal survey.
Yuhasz told city council members Monday that he found used cars for sale on several commercial lots that aren’t licensed for car sales — including five with a common owner in the lot across the street from McDonald’s.
So with what community Yuhasz said was an eye toward “beautification and fairness,” the Brewton City Council on Monday introduced an ordinance that would ban the unauthorized sale of automobiles in parking lots around town.
The council will vote on the unlawful sales measure at its next meeting June 24.
“Most of us have noticed automobiles for sale in lots around the city,” Yuhasz said, noting that those cars for sale in lots not properly licensed are currently OK as long as the property owner does not object. “I’m asking for your help to get this tidied up.”
The proposed ordinance would make it unlawful for anyone to park automobiles for sale on commercially zoned property that is not licensed for the sale of automobiles or motorized vehicles.
Violations would result in a misdemeanor charge and, if the person is convicted, a fine and court costs, Yuhasz said.
The ordinance also covers car sales on residential property, limiting residential property owners to selling one automobile or motorized vehicle per year. Those vehicles must also have been personally owned for at least one year.
The council initially sought to vote for immediate consideration of the ordinance, but because he works for a car dealership and wanted to avoid any appearance of impropriety, Councilman Frank Cotten abstained. City Clerk John Angel said that meant the vote for immediate consideration was not unanimous, so the vote will wait for another two weeks.
If the council approves the ordinance, it will become law once it has been published in the newspaper, Yuhasz said. That will also give him time to contact owners of the vehicles to let them know they will be in violation if they do not move the cars.