WSN trio of athletes to walk-on 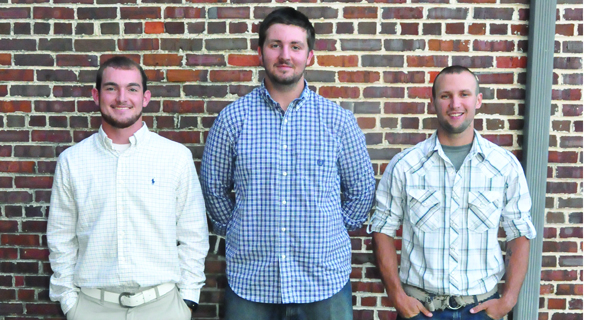 Three W.S. Neal athletes—two football players and one baseball player—will continue their athletic careers as they recently accepted positions as walk-ons to the college of their choice.
Football players Keith Bradley and Austin Dixon will play at West Alabama while baseball player Dylan Godwin will play at Faulkner State. Bradley will be a punter while Austin will be a long snapper. Godwin is expected to play the infield for the Sun Chiefs.
“It feels great, Bradley said. “You get through with high school and you never know what your next move is going to be. To be able to go back and play for somebody is a lot better than not being able to play for anyone.”
Dixon agreed with Bradley.
“It feels great to come back and to be able to play again,” he said. “To know that I have done the things in football to play on further is great.”
The two said it will be great to play with each other at the collegiate level.
“It feels pretty good because there is already the chemistry there,” Dixon said. “You don’t have to go out and find new friends. I mean you still have to do that, but you have somebody there to back you up and go through the pain win.”
Bradley said to have someone you know there with you already makes things easier.
“We are doing the same program and are both going into athletic training,” Bradley said. “It is a big plus to go to the same classes and for someone to be there when you need help.”
Godwin said it feels great to continue to play on the baseball diamond after his senior year at W.S. Neal.
“I have been very blessed to be given the chance to play baseball again,” Godwin said. “ All I really wanted is a chance and I got it.”
Godwin will join former W.S. Neal teammate Damion Williams at Faulkner State after Williams signed earlier in the year.
“It will be a little more comfortable,” Godwin said of having Williams as a teammate again. “I have known Damion for a long time and he is really close to me. We will just stick together and play baseball.”

The 10U Cal Ripken district tournament in East Brewton will continue Saturday afternoon. Due to a team dropping out, EB... read more