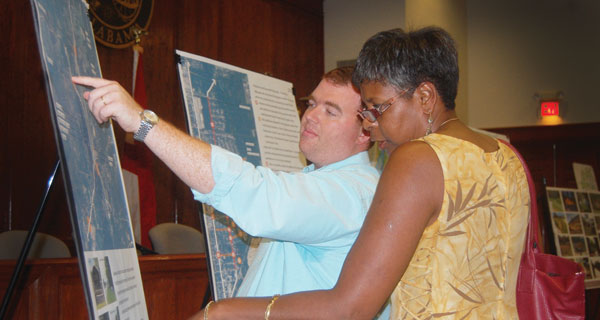 A design plan for the City of Brewton is intended to stretch over several years, but some of its components are relatively inexpensive and could be accomplished quickly, planners said.
Designers with Goodwyn, Mills and Cawood were on hand Monday night for an open house to show off maps of downtown, parks, the Sowell Road and Alco neighborhoods and the city’s gateways.
The centerpiece of the plan — a new park across the creek from Burnt Corn Park — incorporates several amenities such as a zip line, canoeing, camping and walking and bike paths. The city has in recent weeks applied for grants to develop that newly donated property, and it remains the main priority in GMC’s plans.
But other improvements could happen more quickly, said Connie Baggett, director of program management for the city. She pointed out that adding plants and tables and chairs to the boardwalk downtown, for example, would not take much investment.
Residents were invited to give their input at Monday night’s open house, and GMC will use those comments in its final plans.
“I think the plans are great,” said Brewton resident Kristy Ellis, noting that just adding crosswalks in the Sowell Road neighborhoods, for example, would make a big difference. “I’m excited about it.”