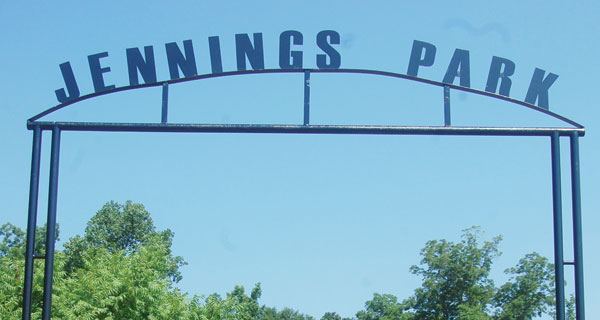 It wasn’t that long ago that the downtown plot of land that came to be known as Burnt Corn Park was a mess, with a junkyard and a row of dilapidated houses, Mayor Yank Lovelace said.
But with a lot of cleanup that began in the 1990s and some fundraising over many years, it turned into a beautiful park, with walking paths, trees and flowers, access to the creek and even a historical marker.
The credit, Lovelace said, belongs to former Mayor Ted Jennings, who was honored Saturday as the park was renamed Jennings Park.
“I wish I had some pictures of what it used to look like,” Lovelace said. “Now we can appreciate the lengths he went to to get the park going.”
Jennings, though, gave the credit to Brewton’s employees and to its people.
“This is such a humbling experience,” he said, “one that I am so appreciative of. I thank my family and the employees of the City of Brewton. They are the very best. … I thank the Tree and Beautification Board. They do an outstanding job. But most of all I want to thank the people of this community. There are so many people in this area who have worked to make Brewton one of the best communities.”
Joe Gordy, chairman of the Tree and Beautification committee, said the park has become one of the most widely used in Brewton, with families and individuals taking walks along its path and youth using the skate park. New lights have just been added to the back of the park along the walking path, and a historical marker shows the place where the city’s first cistern was located.
Lovelace also presented Jennings with a resolution honoring him for his service to Brewton.
“I know I don’t deserve this,” Jennings said of the park naming, “but it means more to you than you will ever know.”