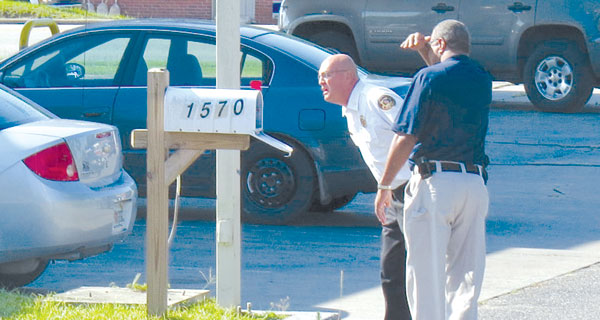 Weaver, Broughton take a look at the package in question.

For two hours early Thursday, Brewton police and firefighters and employees at a local business were just a little anxious about a package found in the business mailbox.
Just after 8 a.m. Thursday, Brewton police were alerted to a “suspicious package” at the South Boulevard Diamond BP convenience store, officials said. Brewton Fire Department personnel also responded to the call.
Lt. Randy Nicholson said although the package turned out to be of no danger, it was not something the employees at the business would normally see in the box.
“We take these kind of calls seriously and investigate them thoroughly,” Nicholson said. “We called in a bomb technician from Andalusia and the package was evaluated then.”
During the investigation and the wait for the technician to arrive, police and fire personnel set up a safe perimeter around the area where the package was found.
Brewton Police Chief Lawrence Weaver said there are certain procedures and guidelines to be used in situations where bombs may be an issue.
“We certainly don’t take these things lightly,” Weaver said. “We set up the initial buffer zone and evacuated anyone in the area. I’m glad things turned out the way they did. This actually turned out to be a good drill for our department and the guys did an excellent job.”
The job meant shutting down a section of U.S. 31 north and south for a period of time, Weaver said.
“That was just part of the guidelines that we go by in these kind of situations,” Weaver said. “When you determine where the problem is and what you’re dealing with you handle things a certain way. When you don’t know what exactly you’re dealing with, you use the most caution until everything is safe.”
Nicholson said an address was found on the package and someone at that location was questioned about the possible contents of the package.
“Through the investigation and questioning it was determined the package only contained a fuel sample,” Nicholson said. “In the end, that’s all it was and there was never any danger at the store.”
Weaver said Thursday’s incident is just another reason emergency responders have to always be ready.
“About 99 percent of the time things end up like they did Thursday, but it’s that 1 percent you have to be prepared for and ready to respond to,” Weaver said. “The police did a good job of investigating things and handling the situation so that everyone stayed safe.”